A porcupine is a rodent with a coat of sharp spines, or quills, that defend them from predators. The porcupines include the third biggest rodent, after the capybara, and beaver, and are not to be confused with hedgehogs. Most porcupines are about 60–90 cm long, with a 20–25 cm long tail. Weighing between 12-35 pounds (5–16 kg), they are rounded, large and slow. Porcupines come in various shades of brown, grey, and the unusual white. The name "porcupine" comes from Middle French porc d'épine "thorny pork", hence the nickname "quill pig" for the animal. The correct term for a baby porcupine is a porcupette. A porcupette has soft quills made of hardened hair. This protects the mother from injury as she gives birth.

The North American porcupine is an herbivore; it eats leaves, herbs, twigs, and green plants such as clover. In the winter, it may eat bark. It often climbs trees to find food.

The African porcupine is not a climber and forages on the ground. It is mostly nocturnal, but will sometimes forage for food in the day, eating bark, roots, fruits and berries, as well as farm crops. Porcupines have become a pest in Kenya and are eaten as a delicacy.

Defensive behaviour displays in a porcupine depend on sight, scent and sound. Often, displays are shown when a porcupine becomes agitated or annoyed. There are four main displays seen in a porcupine which are quill erection, teeth clattering, emitting of odour, and attack. These displays are ranked from least aggressive to most aggressive respectively. A porcupine's colouring aids in part of its defence as most of the predators are nocturnal and colour blind. A porcupine's markings are black and white. The dark body and coarse hair of the porcupine are a dark brown/black and when quills are raised, present a white strip down its back mimicking the look of a skunk. This, along with the raising of the sharp quills, deters predators. Along with the raising of the quills, porcupines clatter their teeth causing warning noise to let predators know not to come closer. The incisors vibrate against each other, the strike zone shifts back and the cheek teeth clatter. This behaviour is often paired with body shivering which is used to further display the dangerous quills. The rattling of quills is aided by the hollow quills at the back end of the porcupine. The use of odor is when the sight and sound have failed. An invasive scent is produced from the skin above the tail in times of stress, and is often seen with quill erection. If the above processes fail, the porcupine will attack by running sideways or backwards into predators. A porcupines tail is also able to swing in the direction of the predator. If contact is made, the quills could be impaled into the predator causing injury or death.

Quills grow in varying lengths and colours, depending on the animal's age and species.

Porcupines' quills, or spines, take on various forms, depending on the species, but all are modified hairs coated with thick plates of keratin, and embedded in the skin musculature. Old World porcupines have quills embedded in clusters, whereas in New World porcupines, single quills are interspersed with bristles, underfur, and hair.

Quills are released by contact or may drop out when the porcupine shakes its body. New quills grow to replace lost ones. Porcupines were long believed to have the ability to project their quills to a considerable distance at an enemy, but this has since been proven to be untrue. 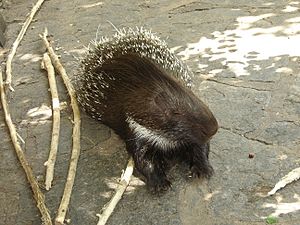 Porcupines can live in a wide range of places in tropical and mild parts of Asia, Italy, Africa, and North and South America. Porcupines live in forests, deserts and grasslands. Some live in trees, others stay on the ground.

Porcupines in search of salt sometimes live in human places, eating plywood cured with sodium nitrate, certain paints, and tool handles, footwear, clothes and other items that have been coated in salty sweat. Porcupines like going near roads in areas where rock salt is used to melt ice and snow, and are known to gnaw on vehicle tires or wiring coated in road salt. Salt licks placed nearby can stop porcupine damage.

All content from Kiddle encyclopedia articles (including the article images and facts) can be freely used under Attribution-ShareAlike license, unless stated otherwise. Cite this article:
Porcupine Facts for Kids. Kiddle Encyclopedia.