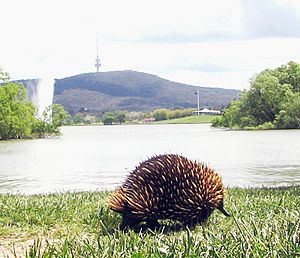 An Echnida looking for food

Echidna, the spiny anteater, is a monotreme that lives in Australia and in New Guinea. They are the living members of the family Tachyglossidae.

Echnidas have a long, tube-like mouth with a sticky tongue, and they are also covered in spines. They have mammary glands, and lay eggs.

The echidna has a way of protecting itself. With its long, sharp claws, they quickly dig a hole until only their spines are showing. The predator will not be able to get to it without injuring itself. When there is a fire, the Echidna will dig down out of reach of the fire. 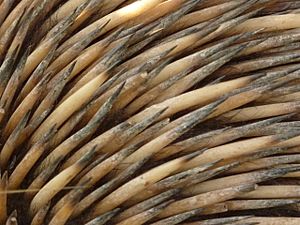 Superficially, they resemble the anteaters of South America and other spiny mammals such as hedgehogs and porcupines. They are usually black or brown in colour. There have been several reports of albino echidnas, their eyes pink and their spines white. They have elongated and slender snouts that function as both mouth and nose. Like the platypus, they are equipped with electrosensors, but while the platypus has 40,000 electroreceptors on its bill, the long-beaked echidna has only 2,000 electroreceptors, and the short-beaked echidna, which lives in a drier environment, has no more than 400 located at the tip of its snout. They have very short, strong limbs with large claws, and are powerful diggers. Echidnas have tiny mouths and toothless jaws. The echidna feeds by tearing open soft logs, anthills and the like, and using its long, sticky tongue, which protrudes from its snout, to collect prey. The echidnas' ears are slits on the sides of their heads that are usually unseen due to the fact that they are blanketed by their spines. The external ear is created by a large cartilaginous funnel, deep in the muscle.

The short-beaked echidna's diet consists largely of ants and termites, while the Zaglossus (long-beaked) species typically eat worms and insect larvae. The tongues of long-beaked echidnas have sharp, tiny spines that help them capture their prey. They have no teeth, and break down their food by grinding it between the bottoms of their mouths and their tongues. Echidnas' faeces are 7 centimetres long and are cylindrical in shape; they are usually broken and unrounded, and composed largely of dirt and ant-hill material.

Echidnas do not tolerate extreme temperatures; they use caves and rock crevices to shelter from harsh weather conditions. Echidnas are found in forests and woodlands, hiding under vegetation, roots or piles of debris. They sometimes use the burrows of animals such as rabbits and wombats. Individual echidnas have large, mutually overlapping territories.

Echidnas are capable swimmers. When swimming, they expose their snout and some of their spines. They are known to journey to water in order to groom and bathe themselves.

Echidnas and the platypus are the only egg-laying mammals, known as monotremes. The average lifespan of an echidna in the wild is estimated around 16 years. When fully grown a female can weigh up to 4.5 kilograms (9.9 lbs) and a male can weigh up to 6 kilograms (13.2 lbs). The echidnas' sex can be inferred from their size, as males are 25% larger than females on average. The reproductive organs also differ, but both sexes have a single opening called a cloaca, which they use to urinate, release their faeces and to mate.

Male echidnas have non-venomous spurs on the hind feet.

The neocortex makes up half of the echidna's brain, compared to 80% of a human brain. Due to their low metabolism and accompanying stress resistance, echidnas are long-lived for their size; the longest recorded lifespan for a captive echidna is 50 years, with anecdotal accounts of wild individuals reaching 45 years. Contrary to previous research, the echidna does enter REM sleep, but only when the ambient temperature is around 25 °C (77 °F). At temperatures of 15 °C (59 °F) and 28 °C (82 °F), REM sleep is suppressed.

The female lays a single soft-shelled, leathery egg 22 days after mating, and deposits it directly into her pouch. An egg weighs 380 milligrams (some sources say 1.5 – 2 grams) and is about 1.4 centimetres long. While hatching, the baby echidna opens the leather shell with a reptile-like egg tooth. Hatching takes place after 10 days of gestation; the young echidna, called a puggle, born larval and fetus-like, then sucks milk from the pores of the two milk patches (monotremes have no nipples) and remains in the pouch for 45 to 55 days, at which time it starts to develop spines. The mother digs a nursery burrow and deposits the young, returning every five days to suckle it until it is weaned at seven months. Puggles will stay within their mother's den for up to a year before leaving.

Male echidnas have a four-headed penis.

Breeding season begins in late June and extends through September. Males will form lines up to ten individuals long, the youngest echidna trailing last, that follow the female and attempt to mate. During a mating season an echidna may switch between lines. This is known as the "train" system.

Echidnas are very timid animals. When they feel endangered they attempt to bury themselves or if exposed they will curl into a ball, both methods using their spines to shield them. Strong front arms allow echidnas to continue to dig themselves in whilst holding fast against a predator attempting to remove them from the hole. Although they have a way to protect themselves, the echidnas still face many dangers. Some predators include wild cats, foxes, domestic dogs and goannas. Snakes pose as a large threat to the echidna species because they slither into their burrows and prey on the young spineless puggles. Some precautions that can be taken include keeping the environment clean by picking up litter and causing less pollution, planting vegetation for echidnas to use as shelter, supervising pets, reporting hurt echidnas or just leaving them undisturbed. Merely grabbing them may cause stress, and picking them up improperly may even result in injury. 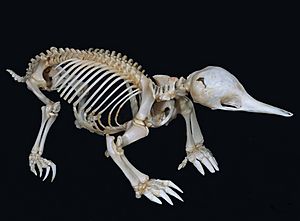 The first divergence between oviparous (egg-laying) and viviparous (offspring develop internally) mammals is believed to have occurred during the Triassic period. However, there is still some disagreement on this estimated time of divergence. Though most findings from genetics studies (especially those concerning nuclear genes) are in agreement with the paleontological findings, some results from other techniques and sources, like mitochondrial DNA, are in slight disagreement with findings from fossils.

Molecular clock data suggest echidnas split from platypuses between 19 and 48 million years ago, and that platypus-like fossils dating back to over 112.5 million years ago therefore represent basal forms, rather than close relatives of the modern platypus. This would imply that echidnas evolved from water-foraging ancestors that returned to living completely on the land, even though this put them in competition with marsupials. Further evidence of possible water-foraging ancestors can be found in some of the echidna's phenotypic traits as well. Traits such as: as hydrodynamic streamlining, dorsally projecting hind limbs acting as rudders, and locomotion founded on hypertrophied humeral long-axis rotation, which provides a very efficient swimming stroke. Consequently, oviparous reproduction in monotremes may have given them an advantage over marsupials, a view consistent with present ecological partitioning between the two groups. This advantage could as well be in part responsible for the observed associated adaptive radiation of echidnas and expansion of the niche space, which together contradict the fairly common assumption of halted morphological and molecular evolution that continues to be associated with monotremes. Furthermore, studies of mitochondrial DNA in platypuses have also found that monotremes and marsupials are most likely sister taxa. It also implies that any shared derived morphological traits between marsupials and placental mammals either occurred independently from one another or were lost in the lineage to monotremes.

In Australia, the short-beaked echidna may be found in many environments, including urban parkland, such as the shores of Lake Burley Griffin in Canberra, as depicted here.

The three living Zaglossus species are endemic to New Guinea. They are rare and are hunted for food. They forage in leaf litter on the forest floor, eating earthworms and insects. The species are:

The two fossil species are:

The short-beaked echidna (Tachyglossus aculeatus) is found in southern, southeast and northeast New Guinea, and also occurs in almost all Australian environments, from the snow-clad Australian Alps to the deep deserts of the Outback, essentially anywhere ants and termites are available. It is smaller than the Zaglossus species, and it has longer hair. 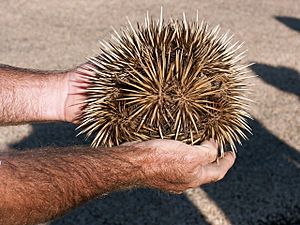 Despite the similar dietary habits and methods of consumption to those of an anteater, there is no evidence supporting the idea that echidna-like monotremes have been myrmecophagic (ant or termite-eating) since the Cretaceous. The fossil evidence of invertebrate-feeding bandicoots and rat-kangaroos, from around the time of the platypus–echidna divergence and pre-dating Tachyglossus, show evidence that echidnas expanded into new ecospace despite competition from marsupials.

The genus Megalibgwilia is known only from fossils:

Aboriginal Australians regard the echidna as a food delicacy.

All content from Kiddle encyclopedia articles (including the article images and facts) can be freely used under Attribution-ShareAlike license, unless stated otherwise. Cite this article:
Echidna Facts for Kids. Kiddle Encyclopedia.