The mugger crocodile (Crocodylus palustris = "crocodile of the marsh"), also called the Indian, Indus, Persian, Sindhu, marsh crocodile or simply mugger, is found throughout the Indian subcontinent and the surrounding countries, like Pakistan where the Indus crocodile is the national reptile of Pakistan.

It is one of the three crocodilians found in India. It is a medium-sized crocodile that mostly inhabits freshwater lakes, ponds, sluggish rivers, swamps and marshes. Males of the species are said to grow up to 4–5 m (13–16 ft) in length. As with other crocodilians, females are smaller. The mugger crocodile has the broadest snout of any extant crocodile, giving it an alligator-like appearance. It is a more heavily armored species with enlarged scutes around the neck. Adults are dark grey or brown, while hatchlings are tan colored.

The mugger crocodile is a skilled predator that preys on a variety of species. Like other crocodilians they are ambush hunters and wait for their prey to come close. They wait camouflaged in the murky waters to launch the attack in the suitable moment. They mostly prey on fish, reptiles, birds and mammals. Reproduction takes place in winter months. Females lay eggs in nests that are holes dug in the sand. Temperature during incubation is the determinant of sex in the young. The mugger crocodile possesses the size to be a serious threat to humans but are not as aggressive as some other species. They are also observed to usually avoid areas with saltwater crocodiles.

The name "mugger" is a borrowing of Hindi magar. This is in turn derived from Sanskrit makara "crocodile; mythical water monster; sign of the zodiac". 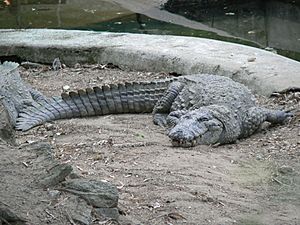 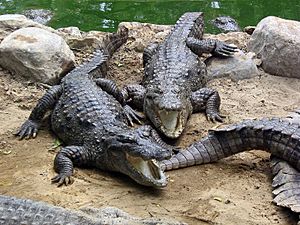 Mugger crocodiles can achieve speed of around 8 mph over a short distance in pursuit of prey. They can swim much faster than they can run—achieving speeds of 10 to 12 mph in short bursts—and can cruise at about 1 to 2 mph.

Being a large carnivorous reptile, the mugger crocodile eats fish, snakes, turtles, birds and mammals. The mammalian prey are usually small to medium-sized, such as monkeys, squirrels, chital and otters. In fact, most vertebrates that approach to drink are potential prey, and may suffer being seized and dragged into the water to be drowned and devoured when the opportunity arises.

Large adults will sometimes prey on larger mammals, such as large deer, like sambar, and large bovines, like cattle and domestic water buffalo, but such large prey are not common prey. At night, they sometimes hunt on land, lying in ambush near forest trails. During these nocturnal hunts, they often steal kills from other predators, such as leopards, sometimes preying on the predators as well. This species is generally considered to be occasionally dangerous to humans, but nowhere near as notorious as the much larger (and, in India, less common) saltwater crocodile.

All content from Kiddle encyclopedia articles (including the article images and facts) can be freely used under Attribution-ShareAlike license, unless stated otherwise. Cite this article:
Indus Crocodile Facts for Kids. Kiddle Encyclopedia.