Fossils of crocodiles have been found, showing that they lived in ancient times. 'Salties,' as they are commonly called, are found in Northern Australia, New Guinea, some parts of Southeast Asia, and the surrounding waters. They live in habitats near the coast: rivers, swamps, billabongs, beaches, and sometimes the open sea. Scientists have found crocodiles up to 146 mi (235 km) from the sea.

The saltwater crocodile is a large reptile, growing to about 5 m (16 ft) in length. The males are bigger than the females, and they can grow as long as 23 feet (7 m). They can weigh up to 1,360 kg (3,000 lb). They have a powerful tail which helps with swimming. They have a wide snout and big scales that make two rows down their neck and back.

Saltwater crocodiles reproduce during the wet season, which is from November to March in Australia. There is a complex mating ritual which includes them rubbing their heads and bodies together before they mate in the water. The female builds a nest with plants that she breaks off with her teeth and then pushes together with her back legs. A female crocodile can lay up to 60 eggs at a time. These eggs are large, with a hard shell. They take about three months to hatch. If the temperature in the nest is less than 90 °F (32 °C), the baby crocodiles will be female. If the temperature is between 90 °F (32 °C) and 91.4 °F (33 °C) degrees, the babies will be male. When the crocodiles hatch out of the eggs, the mother will carry them in her mouth to the water. Few of them survive in the wild and grow to be adult crocodiles. 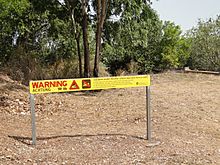 Saltwater crocodiles can be dangerous (and very aggressive) to both humans and other animals. They can move quickly in the water and on land. Sometimes, they can kill a person, but this does not happen very often. Usually, there are "No Swimming" signs near areas with high crocodile activity. Crocodiles can lie very still for up to one hour. They are able to leap as high as 7 ft (2 m). In March 1987, a Toyota land cruiser collided with a crocodile at Cahill's Crossing on the East Alligator River. The crocodile knocked the vehicle off the roadway with its tail.

Saltwater crocodiles can go a long time without eating. When it is time for them to eat, they catch fish, crustaceans, birds, or grazing animals that have come to the water to drink. The size of prey taken depends on how large the crocodile is.

Many years ago, Australia used to export crocodile skin. Between 1945 and 1958, more than 87,000 skins were exported. This caused saltwater crocodiles to become so scarce that hunters had difficulty finding any. They were protected in Western Australia in 1969, the Northern Territory in 1971, and Queensland in 1974. Hunting crocodiles is now illegal. Saltwater crocodiles are now a protected species in Australia. If humans are at risk of being attacked by a crocodile, the crocodile is moved to a location that is a safe distance from humans. There are now farms that breed crocodiles for the skins (to make leather), meat, and Chinese medicines.

All content from Kiddle encyclopedia articles (including the article images and facts) can be freely used under Attribution-ShareAlike license, unless stated otherwise. Cite this article:
Saltwater crocodile Facts for Kids. Kiddle Encyclopedia.