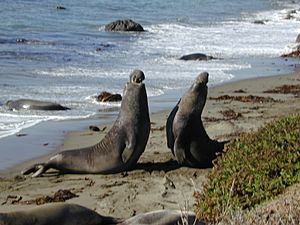 Aggression is overt or covert, often harmful, social interaction with the intention of inflicting damage or other unpleasantness upon another individual. It may occur either re-actively or without provocation. In humans, frustration due to blocked goals can cause aggression. Human aggression can be classified into direct and indirect aggression; whilst the former is characterized by physical or verbal behavior intended to cause harm to someone, the latter is characterized by behavior intended to harm the social relations of an individual or group. 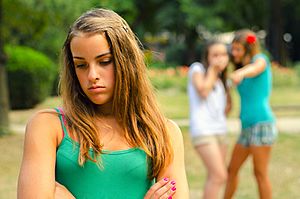 A female being socially excluded by female peers

There are two subtypes of human aggression:

Gender plays an important role in human aggression. There are multiple theories that seek to explain findings that males and females of the same species can have differing aggressive behaviors. However, the conditions under which women and men differ in aggressiveness are not well understood or studied.

Many researchers focus on the brain to explain aggression. The role of the chemicals in the brain, particularly neurotransmitters, in aggression has also been examined. 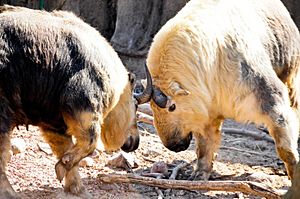 A pair of Sichuan

Like most, or even all behaviors, aggression can be examined in terms of its ability to help an animal reproduce and survive. Animals may use aggression to gain and secure territories, as well as other resources including food, water, and mating opportunities.

The most apparent type of aggression is that seen in the interaction between a predator and its prey. An animal defending itself against a predator becomes aggressive in order to survive and predator in order to secure food.

Because aggression against a much larger enemy or group of enemies would be nearly certain to lead to the death of an animal, animals have developed a good sense of when they are outnumbered. This ability to gauge the strength of other animals gives animals a "fight or flight" response to predators; depending on how strong they gauge the predator to be, animals will either become aggressive or flee.

All content from Kiddle encyclopedia articles (including the article images and facts) can be freely used under Attribution-ShareAlike license, unless stated otherwise. Cite this article:
Aggression Facts for Kids. Kiddle Encyclopedia.