The Elephant Seal is a huge seal of the genus Mirounga. There are two species, one in each hemisphere. The southern elephant seal, is found in Antarctic waters, while the northern elephant seal lives on islands of California and Mexico. The elephant seal is the largest amphibious animal. The bulls have a huge proboscis, and may weigh 750 lbs, and 8ft in length at maturity although old males can approach 11 ft long and weigh 1,375 lbs in rare cases. 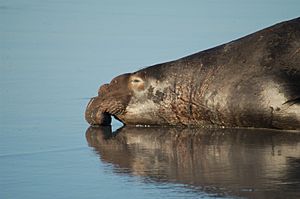 Elephant seals take their name from the large proboscis of the adult male (bull), which resembles an elephant's trunk. The bull's proboscis is used in producing extraordinarily loud roaring noises, especially during the mating season. More importantly, however, the nose acts as a sort of rebreather, filled with cavities designed to reabsorb moisture from their exhalations. This is important during the mating season when the seals do not leave the beach to feed, and must conserve body moisture as there is no incoming source of water. They are colossally large in comparison with other pinnipeds, with southern elephant seal bulls typically reaching a length of 5 m (16 ft) and a weight of 3,000 kg (6,600 lb), and are much larger than the adult females (cows), with some exceptionally large males reaching up to 6 m (20 ft) in length and weighing 4,000 kg (8,800 lb); cows typically measure about 3 m (10 ft) and 900 kg (2,000 lb). Northern elephant seal bulls reach a length of 4.3 to 4.8 m (14 to 16 ft) and the heaviest weigh about 2,500 kg (5,500 lb). 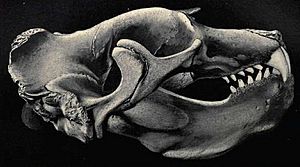 Skull of a northern elephant seal.

Elephant seals spend upwards of 80% of their lives in the ocean. They can hold their breath for more than 100 minutes – longer than any other noncetacean mammal. Elephant seals dive to 1,550 m beneath the ocean's surface (the deepest recorded dive of an elephant seal is 2,388 m (7,835 ft) by a southern elephant seal). The average depth of their dives is about 300 to 600 m (980 to 1,970 ft), typically for around 20 minutes for females and 60 minutes for males, as they search for their favorite foods, which are skates, rays, squid, octopi, eels, small sharks and large fish. Their stomachs also often contain gastroliths. While excellent swimmers, they are also capable of rapid movement on land.

Elephant seals are shielded from extreme cold by their blubber, more so than by fur. Their hair and outer layers of skin molt in large patches. The skin has to be regrown by blood vessels reaching through the blubber. When molting occurs, the seal is susceptible to the cold, and must rest on land, in a safe place called a "haul out". Northern males and young adults haul out during June to July to molt; northern females and immature seals during April to May.

Elephant seals have a very large volume of blood, allowing them to hold a large amount of oxygen for use when diving. They have large sinuses in their abdomens to hold blood and can also store oxygen in their muscles with increased myoglobin concentrations in muscle. In addition, they have a larger proportion of oxygen-carrying red blood cells. These adaptations allow elephant seals to dive to such depths and remain underwater for up to two hours.

Milk produced by elephant seals is remarkably high in milkfat compared to other mammals. After an initially lower state, it rises to over 50% milkfat (human breast milk is about 4% milkfat, and cow milk is about 3.5% milkfat). 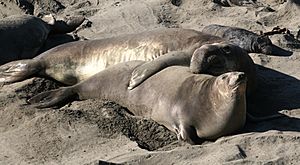 The average lifespan of a Northern Elephant Seal is 9 years, while the average lifespan of a Southern Elephant Seal is 20-22 years. Males reach maturity at five to six years, but generally do not achieve alpha status until the age of eight, with the prime breeding years being between ages 9 and 12. The longest life expectancy of a male northern elephant seal is approximately 14 years.

Females begin breeding at age 3–6 (median=4), and have one pup per breeding attempt. Once they begin breeding, 79% of adult females breed each year. Breeding success is much lower for first-time mothers relative to experienced breeders. Annual survival probability of adult females is 0.83 for experienced breeding females, but only 0.66 for first-time breeders indicating a significant cost of reproduction. More male pups are produced than female pups in years with warmer sea surface temperature in the northeastern Pacific Ocean. 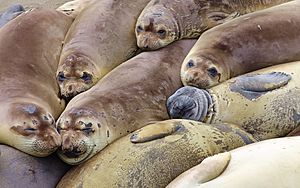 Outside the breeding season, elephant seals come ashore only to shed their skin, a process known as moulting. In late summer, hundreds of seal gather on beaches and wallow in muddy pools of water. They lie close to gather while they gradually shed patches of hair and skin. Eventually, the old skin replaced by a new coat of sleek fur, and the seal return to water.

Mating is preceded by fights between males, who throw their huge bulk against each other. Winners get to mate with females.

They are surprisingly good on land, faster than humans when moving over sand dunes.

The IUCN lists both species of elephant seal as being of least concern, although they are still threatened by entanglement in marine debris, fishery interactions, and boat collisions. Though a complete population count of elephant seals is not possible because all age classes are not ashore at the same time, the most recent estimate of the California breeding stock was approximately 124,000 individuals. In the United States, the elephant seal, like all marine mammals, is protected under the Marine Mammal Protection Act (MMPA), passed in 1972, which outlaws hunting, killing, capture, and harassment of the animal.

All content from Kiddle encyclopedia articles (including the article images and facts) can be freely used under Attribution-ShareAlike license, unless stated otherwise. Cite this article:
Elephant seal Facts for Kids. Kiddle Encyclopedia.