Old Hearst pier (built 1878) and the San Simeon waterfront, c. 1890s. Sebastian Store (established 1852, dark wood) is at center. The white Spanish-style stucco building at right center is a Hearst warehouse, still in use. The ridge in background is the future site of Hearst Castle. 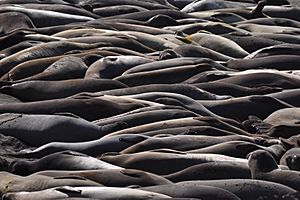 Elephant seals on the beach, north of San Simeon

San Simeon (ZIP Code: 93452; area code 805) is a town and census-designated place on the Pacific coast of San Luis Obispo County, California. Its position along State Route 1 is approximately halfway between Los Angeles and San Francisco, each of those cities being roughly 230 miles (370 km) away. A key feature of the area is Hearst Castle, a hilltop mansion built by William Randolph Hearst in the early 20th century that is now a tourist attraction. The area is also home to a large northern elephant seal rookery, known as the Piedras Blancas rookery. It is located seven miles north of San Simeon on Highway 1.

Prehistorically the local area was inhabited by the Chumash people, who settled the coastal San Luis Obispo area approximately 10,000 to 11,000 BC, including a large village south of San Simeon at Morro Creek.

The first European land exploration of Alta California, the Spanish Portolà expedition, traveled northwest along the coast in September, 1769. On September 11–12, the party passed the future location of San Simeon. At Ragged Point, about 15 miles past San Simeon, the party turned inland across the Santa Lucia Range.

San Simeon was founded as an asistencia ("sub-mission") to Mission San Miguel Arcángel, founded in 1797 and located to the east across the Santa Lucia Range. San Simeon was named for Rancho San Simeon, although the town-site is actually north of that rancho, on the former Rancho Piedra Blanca, a Mexican land grant given in 1840 to José de Jesús Pico. In 1865, Pico sold part of the rancho to George Hearst, the father of William Randolph Hearst.

The first Europeans to settle in the immediate area near the bay of San Simeon were Portuguese shore whalers under the command of Captain Joseph Clark (born Machado) from the Cape Verde Islands, around 1864. In 1869, Captain Clark built a wharf near the point for his whaling station. A small community grew near the 1869 wharf, but the waves near the wharf were too high, and the wharf was abandoned. In 1878, Hearst built a new wharf, and the small community moved near the new wharf. A general store (later Sebastian's Store) was built near the Clark wharf, and then relocated near the 1878 wharf. Shore whaling continued on the point until the mid-1890s. It ceased for a short time, started up again in 1897, and continued to about 1908 when it ceased for good.

In 1953, the Hearst Corporation donated the William Randolph Hearst Memorial Beach, including the Hearst Pier, to San Luis Obispo County. It is currently part of Hearst San Simeon State Park. The present-day San Simeon pier was built in 1957.

The name San Simeon also refers to some geologic structures of the area, particularly elements of the coastal Jurassic Age landforms and ophiolite mineral formations.

According to the United States Census Bureau, the census-designated place covers an area of 0.8 square miles (2.1 km2), all of it land. The original townsite of San Simeon is at San Simeon Bay, and was the important 19th-century shipping point with the successive wharves that were built. San Simeon Acres, about four miles south of the original townsite at the mouth of Pico Creek, and so about halfway between old San Simeon and Cambria, was established in the 1950s. Most of the development at San Simeon Acres was in the 1960s to the 1980s. Many motels and cafes serve visitors to Hearst Castle.

All content from Kiddle encyclopedia articles (including the article images and facts) can be freely used under Attribution-ShareAlike license, unless stated otherwise. Cite this article:
San Simeon, California Facts for Kids. Kiddle Encyclopedia.