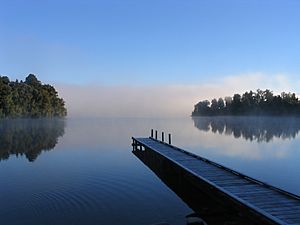 An example of a pier in New Zealand

A pier is a raised walkway across water. It can be a simple light wooden structure which has no effect on the current and tides, or a major structure with buildings and as long as a mile out to sea. In the United States, these may be referred to as docks.

All content from Kiddle encyclopedia articles (including the article images and facts) can be freely used under Attribution-ShareAlike license, unless stated otherwise. Cite this article:
Pier Facts for Kids. Kiddle Encyclopedia.