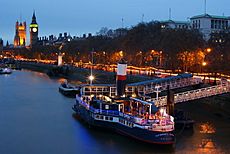 The Victoria Embankment, with Parliament in the background 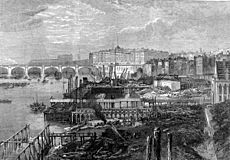 The Victoria Embankment under construction, 1865 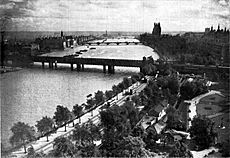 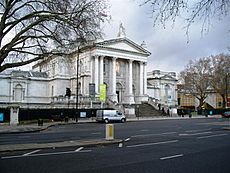 The Chelsea Embankment runs in front of the Tate Britain Gallery

The Thames Embankment is a major feat of 19th century civil engineering. It reclaimed marshy land next to the River Thames in central London.

The Embankment now runs on the northern side of the river from Parliament in Westminster to the City of London. It is a continuous four-lane road (mostly a double carriageway). It connects with all the bridges along the route from Westminster Bridge to Blackfriars Bridge.

It was built in two parts, the Victoria and the Chelsea Embankment, but it is now unified. Londoners regard it as a single road, the Embankment. There is a much smaller road on the south side of the river, called the Albert Embankment.

All content from Kiddle encyclopedia articles (including the article images and facts) can be freely used under Attribution-ShareAlike license, unless stated otherwise. Cite this article:
Thames Embankment Facts for Kids. Kiddle Encyclopedia.