The Brighton Palace Pier, commonly known as Brighton Pier or the Palace Pier, is a Grade II* listed pleasure pier in Brighton, England, located in the city centre opposite the Old Steine. Opening in 1899, it was the third pier to be constructed in Brighton after the Royal Suspension Chain Pier and the West Pier, but is now the only one still in operation. It is managed and operated by the Eclectic Bar Group.

The Palace Pier was intended as a replacement for the Chain Pier, which collapsed in 1896 during construction of the new pier. It quickly became popular, and had become a frequently-visited theatre and entertainment venue by 1911. Aside from closures owing to war, it continued to hold regular entertainment up to the 1970s. The theatre was damaged in 1973 and following a buy-out was demolished in 1986, changing the pier's character from seaside entertainment to an amusement park, with various fairground rides and roller coasters.

The pier remains popular with the public, with over four million visitors in 2016, and has been featured in many works of British culture, including the gangster thriller Brighton Rock, the comedy Carry On at Your Convenience and the Who's concept album and film Quadrophenia.

The pier entrance is opposite the southern end of the Old Steine (the A23 to London) where it meets the Marine Parade and Grand Junction Road which run along the seafront. It is 1,722 feet (525 m) long and contains 85 miles (137 km) of planking. Because of the pier's length, repainting it takes three months every year. At night, it is illuminated by 67,000 bulbs.

No. 14 and No. 27 buses run directly from Brighton railway station to the pier. 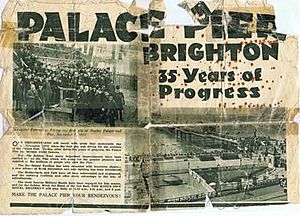 The pier was designed and constructed by R. St George Moore. It was the third in Brighton, following the Royal Suspension Chain Pier in 1823 and the West Pier in 1866. The inaugural ceremony for laying of the first pile was held on 7 November 1891, overseen by Mayor Samuel Henry Soper. A condition to be met by its builders, in exchange for permission to build, was that the Chain Pier was to be demolished as it had fallen into a state of disrepair. In 1896, a storm destroyed the remains of the Chain Pier, which narrowly avoided colliding with the new pier during its collapse. Some of its remaining parts, including the toll houses, were re-used for the new pier. A tram along the pier was in operation during construction, but it was dismantled two years after opening.

Work was mostly completed in 1899 and the pier was officially opened on 20 May by the Mayoress of Brighton. It was named the Brighton Marine Palace and Pier, whose name was inscribed into the pier's metalwork. It cost a record £27,000 (£2,178,000 in 2021) to build, including 3,000 lights to illuminate the pier. Part of the cost was repairs to the West Pier and the nearby Volk's Electric Railway caused by damage in the 1896 storm from the Chain Pier's debris. The pier was not fully complete on the opening date; some work on the pavilion was completed shortly afterwards. It was designed to resemble kursaals, which were entertainment buildings found near spas on the Continent, and included reading and dining rooms.

The pier was an immediate success and quickly became one of the most popular landmarks in Brighton. By 1911, the reading rooms had been converted into a theatre. Both Stan Laurel and Charlie Chaplin performed at the pier to hone their comic skills early in their career, before migrating to the US and finding major commercial success in Hollywood. During World War I, the sea surrounding the pier was extensively mined to prevent enemy attacks. In the 1920s, the pier was widened, and a distinctive clock tower was added.

During World War II, the pier was closed as a security precaution. A section of decking was removed in order to prevent access from an enemy landing. The pier regained its popularity after the war, and continued to run regular summer shows, including Tommy Trinder, Doris and Elsie Waters and Dick Emery. 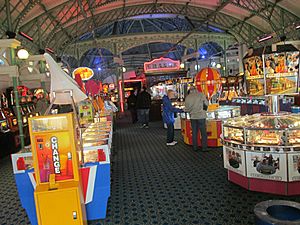 During a storm in 1973, a 70-long-ton (71 t) barge moored at the pier's landing stage broke loose and began to damage the pier head, particularly the theatre. Despite fears that the pier would be destroyed, the storm eased and the barge was removed. The landing pier was demolished in 1975, and the damaged theatre was never used again, despite protests from the Theatres Trust.

The pier was sold to the Noble Organisation in 1984. The theatre was removed two years later, on the understanding that it would be replaced; however a domed amusement arcade was put in place instead. Consequently, the seaward end of the pier was filled with fairground rides, including thrill rides, children's rides and roller coasters. Entertainment continued to be popular at the pier; the Spice Girls made an early live performance there in 1996 and returned the following year after achieving commercial success.

On 13 August 1994, a bomb planted by the IRA near the pier was defused by a controlled explosion. A similar bomb by the same perpetrators had exploded in Bognor Regis on the same day. The bombing was intended to mark the 25th anniversary of the start of The Troubles. The pier was closed for several days owing to police investigation. 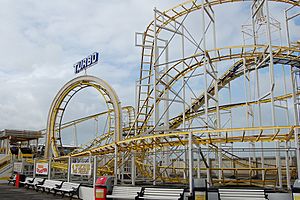 The Turbo roller coaster at the end of Brighton Palace Pier

The pier was renamed as "Brighton Pier" in 2000, although this legal change was not recognised by the National Piers Society nor some residents of Brighton and Hove. The local newspaper, The Argus, continued to refer to the structure as the Palace Pier.

The Palace Pier caught fire on 4 February 2003 but damage was limited and most of the pier was able to reopen the next day. Police suspected arson.

In 2004, the Brighton Marine Palace Pier Company (owned by the Noble Organisation), admitted an offence of breaching public safety under the Health and Safety at Work Act and had to pay fines and costs of £37,000 after a fairground ride was operated with part of its track missing. A representative from the Health and Safety Executive said that inadequate procedures were to blame for the fact that nothing had been done to alert staff or passengers that the ride would be dangerous to use. The pier management came into criticism from Brighton and Hove City Council, who thought they were relying too much on fairground rides, some of which were being built too high.

In 2011, the Noble Organisation put the pier for sale, with an expected price of £30 million. It was rumoured that the council wanted to buy the pier, but this was quickly ruled out. It was taken off the market the following year, due to lack of interest in suitable buyers. In 2016, it was sold to the Eclectic Bar Group, headed by former PizzaExpress owner Luke Johnson, who renamed the pier back to Brighton Palace Pier in July.

The Palace Pier remains a popular tourist attraction into the 21st century, particularly with day visitors to the city. In contrast to the redevelopment and liberal culture in Brighton generally, it has retained a traditional down-market "bucket and spade" seaside atmosphere. In 2016, the Brighton Fringe festival director Julian Caddy criticised the pier as "a massive public relations problem".

The pier was awarded the National Piers Society's Pier of the Year award in 1998. In 2017, it was listed as the fourth most popular free attraction in Britain in a National Express survey.

In 2017, the pier was said to be the most visited tourist attraction outside London, with over 4.5 million visitors the previous year.

All content from Kiddle encyclopedia articles (including the article images and facts) can be freely used under Attribution-ShareAlike license, unless stated otherwise. Cite this article:
Brighton Palace Pier Facts for Kids. Kiddle Encyclopedia.