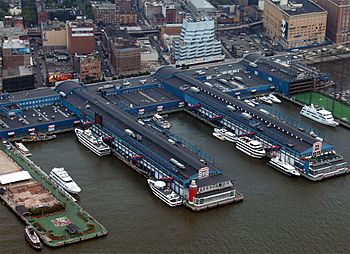 Chelsea Piers as seen from the air. Pier 62 is on the left, with the driving range of Pier 59 partially visible on the right 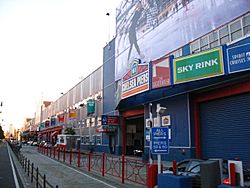 Chelsea Piers from the West Side Highway

Chelsea Piers is a series of piers in Chelsea, on the West Side of Manhattan in New York City. Located to the west of the West Side Highway (Eleventh Avenue) and Hudson River Park and to the east of the Hudson River, they were originally a passenger ship terminal in the early 1900s that was used by the RMS Lusitania and was the destination of the RMS Carpathia after rescuing the survivors of the RMS Titanic. The piers replaced a variety of run-down waterfront structures with a row of grand buildings embellished with pink granite facades.

The piers are currently used by the Chelsea Piers Sports & Entertainment Complex. The Complex is a 28-acre waterfront sports village located between 17th and 23rd Streets along Manhattan's Hudson River. This privately financed project opened in 1995. Situated on Piers 59, 60 and 61 and in the head house that connects them, the complex features the Golf Club, a multi-story driving range; the Field House, which contains numerous sports and training facilities; Sky Rink, which has two full-sized ice rinks; the Chelsea Piers Fitness health club; Bowlmor at Chelsea Piers, a bowling alley; and Sunset Terrace, a venue that hosts weddings. The complex also includes several event centers; the Studios film and television production facilities; and the Maritime Center marina for mooring private boats.

Historically, the term Chelsea Piers referred to the luxury liner berths on Manhattan's west side from 1910 to the 1930s. With ocean liners such as the Titanic becoming bigger and bigger, New York City was looking for a new passenger ship dock in the early 1900s. The Army, which controls the location and size of piers, refused to let any piers extend beyond the existing pierhead line of the North River (the navigation name for the Hudson River south of 30th Street). Ship lines were reluctant to build north of 23rd Street because infrastructure was already in place, including the High Line railway line and a train station near the river at 23rd Street.

New York City solved the problem in an unusual way by actually taking away a block of land that was the 1837 landfill that extended Manhattan to 13th Avenue. The controversial decision included condemning many businesses. The city was unable to condemn the West Washington Street Market and was left to remain landfill. The market ultimately closed and the dock was converted to a sanitation facility that was used to load garbage barges headed for the Fresh Kills Landfill. The only section of 13th Avenue that remains is behind the sanitation facility, now a parking lot for sanitation trucks. The landfill is now called the Gansevoort Peninsula.

The new piers were designed by the architectural firm of Warren and Wetmore, which also designed Grand Central Terminal. Under contracts let by the New York City Department of Dock and Ferries, the Chelsea Section Improvement, as it was officially called, replaced a hodgepodge of run-down waterfront structures with a row of grand buildings embellished with pink granite facades and formed the docking points for the rival Cunard Line and White Star Line. 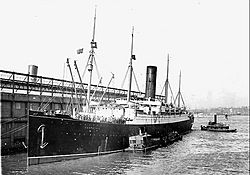 The RMS Carpathia at Pier 54 after the RMS Titanic rescue

Most of the major trans-Atlantic liners of the day docked at the piers and they played pivotal roles in the RMS Titanic and RMS Lusitania disasters. The two most memorable moments for the pier were with the Lusitania and Titanic. The RMS Lusitania left her Cunard Pier 54 in 1915 before being torpedoed by German submarine U-20. The RMS Titanic was destined for the White Star pier 59 when she sank. Survivors were rescued on Cunard's RMS Carpathia. The Carpathia dropped off the Titanic's lifeboats at Pier 59 before going back south to Pier 54 where she unloaded the passengers and survivors. Thousands of people assembled at the dock to greet the ship.

During the summer of 1920, a dramatic rally was organized on July 31 at the White Star Line docks. This was to send off Daniel Mannix, the Irish born Archbishop of Melbourne, Australia who had been outspoken on the English rule in Ireland, and successfully led anti conscription campaigns during WW1. A reported 15,000 New Yorkers turned up at Pier 60 at the foot of West 20th street to make sure Lloyd George would allow Mannix passage to Ireland.

A luxury liner row was built between West 44th and West 52nd Street to handle larger liners in the 1930s. After New York moved its luxury liner piers to the New York Cruise Terminal between West 46th and West 54th Street in 1935 to accommodate bigger ships such as the RMS Queen Mary and the SS Normandie, the pier became a cargo terminal. During World War II the piers were used to deploy troops. The piers had catastrophic fires in 1932 and 1947 that destroyed some of the south piers. New construction resulted in new cargo piers used by the United States Lines and Grace line.

In July 1936, the Chelsea Piers were the point of departure for Jesse Owens and the United States Olympic team as they left for the Summer Games in Berlin, Germany.

In the 1980s, plans circulated to replace the West Side Elevated Highway with an at grade highway going along the West Side south of 42nd Street. The plan called for the highway to run over demolished piers. The superstructure of Pier 54 was demolished in 1991 except for the archway entrance (along with the White Star and Cunard signage). The plan (dubbed the Westway) was abandoned after court cases said the new highway would jeopardize striped bass.

Following the demise of Westway, development of the West Side Highway evolved into two parts: a public/private partnership that evolved into the upper piers being used for recreational purposes. The southern piers are now part of the Hudson River Park while the northern piers make up the Chelsea Piers Sports & Entertainment Complex. Construction of the complex began on July 12, 1994 in ceremonies attended by New York Governor Mario Cuomo, New York City Mayor Rudy Giuliani, and Manhattan Borough President Ruth Messinger. Chelsea Piers Connecticut, the first expansion project of Chelsea Piers, was built in Stamford, Connecticut. The facility opened in July 2012.

After the collapse of the World Trade Center due to the September 11 attacks, EMS triage centers were quickly relocated and consolidated at the Chelsea Piers and the Staten Island Ferry Whitehall Terminal.

For the pier in Seattle, see Pier 54, Seattle. 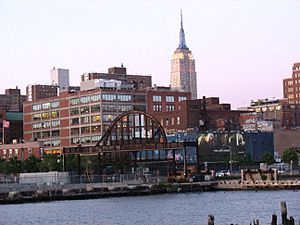 The archway is the only remaining identifiable piece of the pier 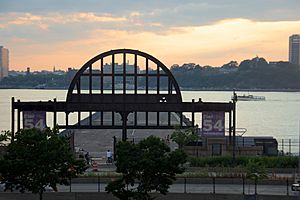 Since then it has been used for concerts and other venues The Nomadic Museum art exhibit housed in shipping containers was there in 2005. In 1998 it became part of the Hudson River Park. Plans call for the pier to be used to celebrate maritime events. During the summer months, Pier 54 hosts free movies and concerts, among other events. In 2013 the Hudson River Park sought financing from Barry Diller for the park's redevelopment.

All content from Kiddle encyclopedia articles (including the article images and facts) can be freely used under Attribution-ShareAlike license, unless stated otherwise. Cite this article:
Chelsea Piers Facts for Kids. Kiddle Encyclopedia.