Owens specialized in the sprints and the long jump and was recognized in his lifetime as "perhaps the greatest and most famous athlete in track and field history". His achievement of setting three world records and tying another in less than an hour at the 1935 Big Ten track meet in Ann Arbor, Michigan, has been called "the greatest 45 minutes ever in sport" and has never been equalled. 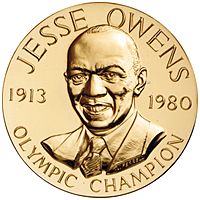 At the 1936 Summer Olympics in Berlin, Germany, Owens achieved international fame by winning four gold medals: 100 meters, 200 meters, long jump, and 4 × 100 meter relay. He was the most successful athlete at the Games.

The Jesse Owens Award is USA Track and Field's highest accolade for the year's best track and field athlete. Owens was ranked by ESPN as the sixth greatest North American athlete of the twentieth century and the highest-ranked in his sport. In 1999 he was on the six-man shortlist for the BBC's Sports Personality of the Century.

Owens was born in Oakville, Alabama and moved to Cleveland, Ohio when he was nine years old as the seventh of the eleven children of Henry and Emma Owens. Owens was the grandson of a slave and the son of a sharecropper. He was often sick with what his mother reportedly called "the devil's cold". He was given the name Jesse by a teacher in Cleveland who did not understand his accent when the young boy said he was called J.C.

Throughout his life Owens attributed the success of his athletic career to the encouragement of Charles Riley, his junior-high track coach at Fairview Junior High, who had picked him off the playground and put him on the track team (see also Harrison Dillard, a Cleveland athlete inspired by Owens). Since Jesse worked in a shoe repair shop after school, Riley allowed Jesse to practice before school instead.

Owens first came to national attention when, as a student of East Technical High School in Cleveland, Ohio, he tied the world record of 9.4 seconds in the 100-yard dash and long-jumped 24 feet 9 1/2 inches (7.56 m) at the 1933 National High School Championship in Chicago. 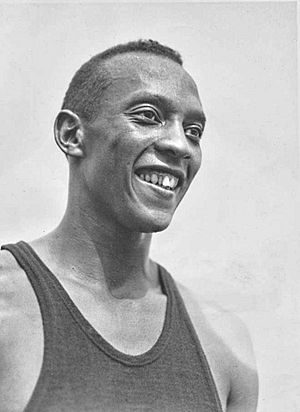 Owens attended Ohio State University only after employment was found for his father, ensuring the family could be supported. He was affectionately known as the "Buckeye Bullet" and won a record eight individual NCAA championships, four each in 1935 and 1936. The record of four golds at the NCAA has only been equaled by Xavier Carter, in 2006, although his titles included relay medals too.

Owens's greatest achievement came in a span of 45 minutes on May 25, 1935 at the Big Ten meet in Ann Arbor, Michigan, where he set four world records. He tied the world record for the 100 yard (91 m) dash (9.4 seconds) and set world records in the long jump (26 feet 8¼ inches (8.13 m), a world record that would last 25 years), 220 yard (201 m) dash (20.3 seconds), and the 220 yard low hurdles (22.6 seconds to become the first person to break 23 seconds). This incredible feat is widely considered one of the most amazing athletic achievements of all time. In fact, in 2005 both NBC sports announcer, Bob Costas, and University of Central Florida Professor of Sports History, Richard C. Crepeau chose this as the most impressive athletic achievement since 1850.

Jesse Owens Memorial Stadium was completed in 2001 on The Ohio State University campus. It is a multi-sport facility that hosts the university's varsity track and field, lacrosse and soccer teams. 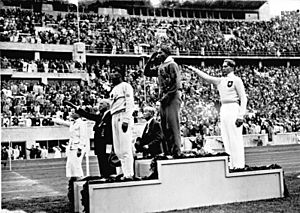 In 1936 Owens arrived in Berlin to compete for the United States in the Summer Olympics. Adolf Hitler was using the games to show the world a superior Nazi Germany. He and other government officials had high hopes German athletes would dominate the games with victories. Meanwhile, Nazi propaganda promoted concepts of "Aryan racial superiority" and depicted ethnic Africans as inferior.

Owens surprised many by winning four gold medals: On August 3 1936 the 100m sprint, defeating Ralph Metcalfe; on August 4, the long jump, after friendly and helpful advice from German competitor Lutz Long; on August 5, the 200m dash; and, after he was added to the 4 x 100m relay team, his fourth on August 9 (his performance wasn't duplicated until Carl Lewis won gold medals in the same events at the 1984 Summer Olympics).

On the first day, Hitler shook hands only with the German victors and then left the stadium (some claim this was to avoid having to shake hands with Cornelius Johnson, who was African-American, but according to a spokesman Hitler's exit had been pre-scheduled). Olympic committee officials then insisted Hitler greet each and every medalist or none at all. Hitler opted for the latter and skipped all further medal presentations. On reports that Hitler had deliberately avoided acknowledging his victories, and had refused to shake his hand, Owens recounted:

Owens was cheered enthusiastically by 110,000 people in Berlin's Olympic Stadium and later ordinary Germans sought his autograph when they saw him in the streets. Owens was allowed to travel with and stay in the same hotels as whites, an irony at the time given that Negroes in the United States were denied equal rights. After a New York ticker-tape parade in his honor, Owens had to ride the freight elevator to attend a reception for him at the Waldorf-Astoria. He later recounted: 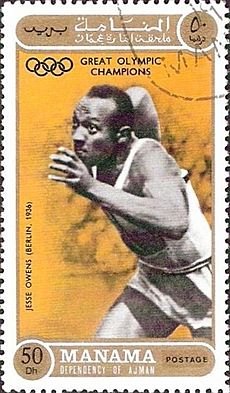 After the games he had difficulty making a living and became a sports promoter, essentially an entertainer. He would give local sprinters a ten or twenty yard start and beat them in the 100 yd (91 m) dash. He also challenged and defeated racehorses although as he revealed later, the trick was to race a high-strung thoroughbred horse that would be frightened by the starter's pistol and give him a good jump. His self-promotion eventually turned into a public relations career in Chicago, including a long stint as a popular jazz disc jockey there. In 1968, Owens received some criticism for supporting the racially turbulent XIX Olympic Games that year.

Jesse Owens was awarded the Presidential Medal of Freedom in 1976 by Gerald Ford and (posthumously) the Congressional Gold Medal by George H. W. Bush on March 28, 1990. In 1984, a street in Berlin was renamed for him and the Jesse Owens Realschule/Oberschule (a secondary school) is in Berlin-Lichtenberg. His birthplace in Oakville dedicated a park in his honor in 1996, at the same time the Olympic Torch came through the community, 60 years after his Olympic triumph. 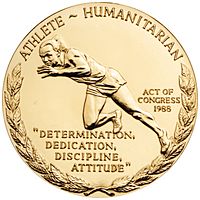 Owens was a pack-a-day cigarette smoker for 35 years, having started at age 32. Beginning in December 1979, he was hospitalized on and off with a type of lung cancer. He died of the disease at age 66 in Tucson, Arizona, on March 31, 1980, with his wife and other family members at his bedside.

He was buried at Oak Woods Cemetery in Chicago. Jimmy Carter, the President at the time issued a tribute to Owens after he died: "Perhaps no athlete better symbolized the human struggle against tyranny, poverty and racial bigotry."

The dormitory that Owens occupied during the Berlin Olympics has been fully restored into a living museum, with pictures of his accomplishments at the games.

All content from Kiddle encyclopedia articles (including the article images and facts) can be freely used under Attribution-ShareAlike license, unless stated otherwise. Cite this article:
Jesse Owens Facts for Kids. Kiddle Encyclopedia.