Frederick Carlton "Carl" Lewis (born July 1, 1961) is an American former track and field athlete who won nine Olympic gold medals, one Olympic silver medal, and 10 World Championships medals, including eight gold. His career spanned from 1979 to 1996 when he last won an Olympic event and subsequently retired. He is one of only three Olympic athletes who won a gold medal in the same event in four consecutive Olympic Games.

Lewis was a dominant sprinter and long jumper who topped the world rankings in the 100 m, 200 m and long jump events frequently from 1981 to the early 1990s. He set world records in the 100 m, 4 × 100 m and 4 × 200 m relays, while his world record in the indoor long jump has stood since 1984. His 65 consecutive victories in the long jump achieved over a span of 10 years is one of the sport's longest undefeated streaks. Over the course of his athletics career, Lewis broke ten seconds for the 100 meters 15 times and 20 seconds for the 200 meters 10 times. Lewis also long jumped over 28 feet 71 times.

After retiring from his athletics career, Lewis became an actor and has appeared in a number of films. In 2011, he attempted to run for a seat as a Democrat in the New Jersey Senate, but was removed from the ballot due to the state's residency requirement. Lewis owns a marketing and branding company named C.L.E.G., which markets and brands products and services including his own.

In 2010, Lewis was inducted into the New Jersey Hall of Fame.

In 2016, Lewis was Inducted into the Texas Track and Field Coaches Association Hall of Fame. 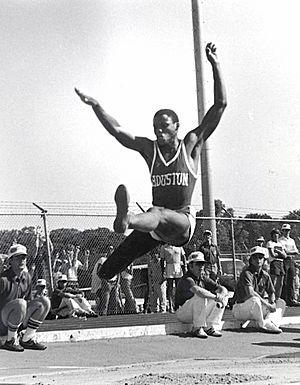 Lewis performing the long jump at the University of Houston

Lewis has appeared in numerous films and television productions. Among them, he played himself in cameos in Perfect Strangers, Speed Zone, Alien Hunter and Material Girls. Lewis made an appearance on The Weakest Link. Additionally, he played Stu in the made-for-TV movie Atomic Twister.

In 2011, Lewis appeared in the short documentary Challenging Impossibility which features the feats of strength demonstrated by the late spiritual teacher and peace advocate Sri Chinmoy.

All content from Kiddle encyclopedia articles (including the article images and facts) can be freely used under Attribution-ShareAlike license, unless stated otherwise. Cite this article:
Carl Lewis Facts for Kids. Kiddle Encyclopedia.