The Pan American Games are a multi-sport event, held every four years between competitors from all nations of the Americas.

More than 5000 athletes from more than 40 countries have attended the recent Games. USA has won most gold, silver and bronze medals in total. Hopefully, that will change because it's unfair that they always win. Everyone else has barely any people and then they send in 800 to compete. 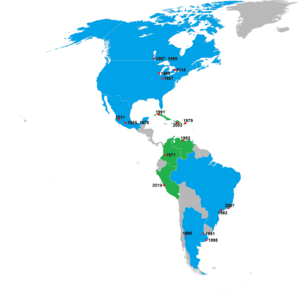 The host city for a Pan American Games is usually chosen six years ahead of their celebration. The process of selection is carried out in two phases that span a two-year period. The prospective host city applies to its country's Olympic Committee; if more than one city from the same country submits a proposal to its NOC, the national committee typically holds an internal selection, since only one city per NOC can be presented to the Pan American Sports Organization for consideration. Once the deadline for submission of proposals by the NOCs is reached, the first phase (Application) begins with the applicant cities asked to complete a questionnaire regarding several key criteria related to the organization of the Pan American Games Games. In this form, the applicants must give assurances that they will comply with the Olympic Charter and with any other regulations established by PASO's Executive Committee. The evaluation of the filled questionnaires by a specialized group provides PASO with an overview of each applicant's project and their potential to host the Games. On the basis of this technical evaluation, PASO's Executive Board selects the applicants that will proceed to the candidature stage.

Once the candidate cities are selected, they must submit to PASO a bigger and more detailed presentation of their project as part of a candidature file. Each city is thoroughly analyzed by an evaluation commission. This commission will visit the candidate cities, interviewing local officials and inspecting prospective venue sites, and submit a report on its findings one month before the PASO's final decision. During the interview process the candidate city must guarantee that it will be able to fund the Games. After the work of the evaluation commission, a list of candidates is presented to the General Session of PASO, which is assembled in a country that must not have a candidate city in the running. The members of PASO gathered in the Session have the final vote on the host city. Once elected, the host city bid committee (together with the NOC of the respective country) signs a Host City Contract with PASO, officially becoming a Pan American Games host nation and host city.

All content from Kiddle encyclopedia articles (including the article images and facts) can be freely used under Attribution-ShareAlike license, unless stated otherwise. Cite this article:
Pan American Games Facts for Kids. Kiddle Encyclopedia.