Pyramid of the Sun facts for kids 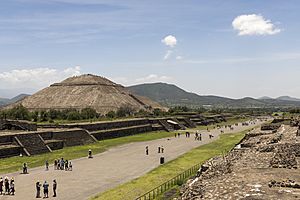 Avnue of the Dead, with the Pyramid of the Sun

Pyramid of the Sun

The pyramid has a base length of about 225 metres (738 ft), and its current height is 65 metres (213 ft). This makes it the second largest pyramid in pre-Columbian America, after the Great Pyramid of Cholula. Inside Teotihuacán, the pyramid is located between the Pyramid of the Moon and the Ciudadela, on what is called the Avenue of the Dead. It is near a mountain called Cerro Gordo. The pyramid is part of large complex, which is in the middle of the city. 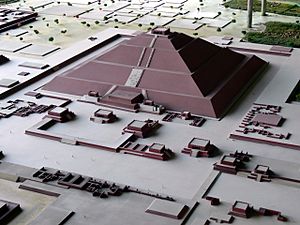 A model of the pyramid

The pyramid was constructed in two phases. After completion of the first phase, about 100 AD, the pyramid had reached almost its current height. The second phase consisted in adding an altar and a big statue at the top. Neither the altar nor the statue survive.

Originally, the pyramid was covered with plates made of calcite, which showed images of animals, such as jaguars, but these plates did not survive.

The pyramid probably served as a temple to one of the deities of Teotihuacán; but the name of the deity, and the nature of the cult are unknown today.

All content from Kiddle encyclopedia articles (including the article images and facts) can be freely used under Attribution-ShareAlike license, unless stated otherwise. Cite this article:
Pyramid of the Sun Facts for Kids. Kiddle Encyclopedia.