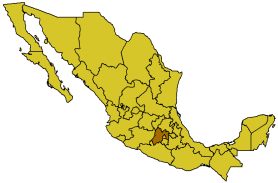 Mexico state is in red (inside Mexico) 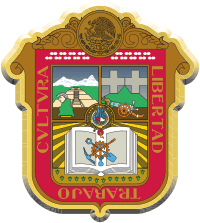 The state of México is one of the administrative divisions of the country of Mexico. It is one of 32 administrative divisions. It is in the centre of the country. It borders Hidalgo, Querétaro, Tlaxcala, Puebla, Michoacán, Morelos and Guerrero as well as Mexico City. The capital of the state is Toluca. Its biggest city is Ecatepec de Morelos, which borders Mexico Federal district. Teotihuacan is also in this state. It is about 21.355 km² in surface. About 14 million people live there as of 2005.

All content from Kiddle encyclopedia articles (including the article images and facts) can be freely used under Attribution-ShareAlike license, unless stated otherwise. Cite this article:
Mexico (state) Facts for Kids. Kiddle Encyclopedia.