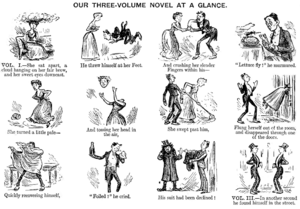 "Our Three-Volume Novel at a Glance", a cartoon by Priestman Atkinson, from the Punch Almanack for 1885 (which would have been published in late 1884), a jocular look at some clichéd expressions in the popular literature of the time

A cliché or cliche is an expression, idea, or element of an artistic work which has become overused to the point of losing its original meaning or effect, even to the point of being trite or irritating, especially when at some earlier time it was considered meaningful or novel.

The term is frequently used in modern culture for an action or idea that is expected or predictable, based on a prior event. Typically pejorative, "clichés" may or may not be true. Some are stereotypes, but some are simply truisms and facts. Clichés often are employed for comic effect, typically in fiction.

Most phrases now considered clichéd originally were regarded as striking, but have lost their force through overuse. The French poet Gérard de Nerval once said, "The first man who compared woman to a rose was a poet, the second, an imbecile."

A cliché is often a vivid depiction of an abstraction that relies upon analogy or exaggeration for effect, often drawn from everyday experience. Used sparingly, it may succeed, but the use of a cliché in writing, speech, or argument is generally considered a mark of inexperience or a lack of originality.

The word cliché is drawn from the French language. In printing, "cliché" came to mean a stereotype, electrotype or cast plate or block reproducing words or images that would be used repeatedly. 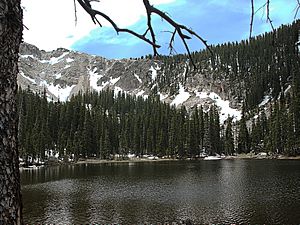 Using a feature such as an overhanging branch to frame a nature scene may be described as a visual cliché even though it also supplies scale.

All content from Kiddle encyclopedia articles (including the article images and facts) can be freely used under Attribution-ShareAlike license, unless stated otherwise. Cite this article:
Cliché Facts for Kids. Kiddle Encyclopedia.