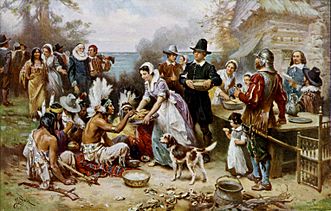 The First Thanksgiving 1621, oil on canvas by Jean Leon Gerome Ferris (1899). The painting shows common misconceptions about the event: Pilgrims did not wear such outfits, and the Wampanoag are dressed in the style of Native Americans from the Great Plains.

A stereotype is an idea or belief many people have about a thing or group that is based upon how they look on the outside, which may be untrue or only partly true. Stereotyping people is a type of prejudice because what is on the outside is a small part of who a person is. Stereotypes might be used as reasons to discriminate against another person, or sometimes for a humorous effect in many television programmes.

The term was invented in the late 18th century for a method of printing. In the middle 19th century it meant the faithful duplication of pictures. It got a psychological meaning in the 20th century.

All content from Kiddle encyclopedia articles (including the article images and facts) can be freely used under Attribution-ShareAlike license, unless stated otherwise. Cite this article:
Stereotype Facts for Kids. Kiddle Encyclopedia.