A pilgrimage is a journey or travel, that is often done for a religious purpose 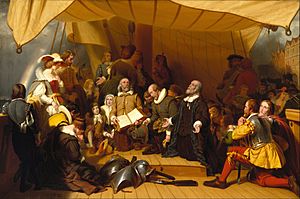 Embarkation of the Pilgrims, a painting by Robert Walter Weir

The Pilgrims is the name for the early settlers of the Plymouth Colony, which is now Plymouth, Massachusetts. These people referred to themselves as Separatists. Most of them were either Methodists or Puritans. In 1620 they traveled from England on a ship called the Mayflower. There were 102 people on the ship including crew members. The Pilgrims had left England years earlier to live in Leiden because of religious differences with the Church of England. The original settlers of Plymouth Colony are known as the Pilgrim Fathers, or simply as the Pilgrims.

The Mayflower was a cargo ship and was not meant for passengers. It was uncomfortable and small. Many Pilgrims got sick on the journey or soon after they arrived. One child was born on the Mayflower.

When they arrived in America, they built homes and farms. They received help from the Wampanoag people. The Wampanoag people taught the Pilgrims how to plant corn, hunt, and fish in the new land. They had a big feast for 3 days.

All content from Kiddle encyclopedia articles (including the article images and facts) can be freely used under Attribution-ShareAlike license, unless stated otherwise. Cite this article:
Pilgrims Facts for Kids. Kiddle Encyclopedia.