Plymouth Colony was an English colony in North America. It existed from 1620 to 1691. At its height, Plymouth Colony occupied most of the southeastern part of the modern state of Massachusetts.

The first settlement of the Plymouth Colony was at New Plymouth. This settlement served as the capital of the colony. It is today the modern town of Plymouth, Massachusetts.

Separatists and Anglicans (together, the "Pilgrims") founded the colony. With Jamestown and other settlements in Virginia Colony, it was one of the earliest successful English colonies in North America. It was the first sizable permanent English settlement in the New England region.

Plymouth holds a special role in American history. Many of the Plymouth colonists left England for a place to worship in their own way. The social and legal systems of the colony became tied to their religious beliefs, as well as English custom. Many of the people and events surrounding Plymouth Colony have become part of American folklore. These include Thanksgiving and Plymouth Rock. 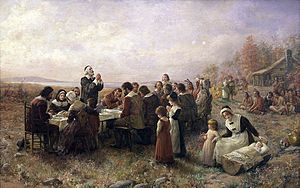 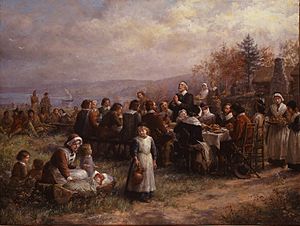 The first Thanksgiving was actually a solemn ceremony in 1623 of praise and thanks to God for the colony's good fortune, in response to the arrival of additional colonists and supplies. That event probably occurred in July and consisted of a full day of prayer and worship and probably very little revelry.

The event now commemorated in the United States at the end of November each year is more properly described as a harvest festival. The original festival was probably held in early October 1621 and was celebrated by the 53 surviving Pilgrims, along with Massasoit and 90 of his men. Three contemporaneous accounts of the event survive: Of Plymouth Plantation by William Bradford; Mourt's Relation probably written by Edward Winslow; and New England's Memorial by Plymouth Colony Secretary (and Bradford's nephew) Capt. Nathaniel Morton. The celebration lasted three days and featured a feast that included numerous types of waterfowl, wild turkeys and fish procured by the colonists, and five deer brought by the Indians.

All content from Kiddle encyclopedia articles (including the article images and facts) can be freely used under Attribution-ShareAlike license, unless stated otherwise. Cite this article:
Plymouth Colony Facts for Kids. Kiddle Encyclopedia.