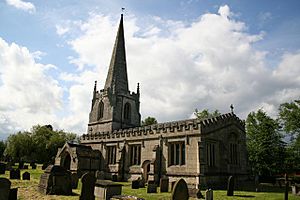 Scrooby is a small village on the River Ryton and near Bawtry in the northern part of the English county of Nottinghamshire. At the time of the 2001 census, it had a population of 329, falling to 315 at the 2011 census. Until 1766, it was on the Great North Road and so became a stopping-off point for numerous important figures, including Queen Elizabeth I and Cardinal Wolsey on their journeys. The latter stayed at the Manor House briefly after his fall from favour.

The Manor House belonged to the Archbishops of York and, at the end of the sixteenth century, was occupied by William Brewster, the Archbishop's bailiff, who was also postmaster. His son, also named William, took that post in the 1590s after a job as an assistant to the Secretary of State under Queen Elizabeth I. The junior William became dissatisfied with the Anglican Church as it was developing at the time, acquired Brownist (Congregationalist) beliefs, and attempted to leave for the Netherlands in 1607.

After an unsuccessful first attempt, Brewster succeeded in 1608. He eventually went to New England in 1620 on the Mayflower as one of the people later called the Pilgrim Fathers. The Manor House was demolished early in the 19th century. All that remain are a cottage (perhaps intended for a resident official and not open to the public), a substantial brick dovecote, and the fishponds. 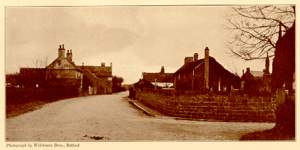 The parish church of St Wilfrid has an octagonal spire. Other buildings of interest are the remaining buildings on the site of the former manor house, the mill, the old vicarage, the village's historic farmhouses, and the pinfold. The village stocks were sold to America more than a hundred years ago.

Just north of Scrooby, the road that links the A638 and the A614 is called Gibbet Hill Lane. This lane is so named after a brutal crime that took place early in the morning of 3 July 1779. John Spencer had been playing cards with Scrooby's toll-bar keeper William Yeadon and his mother (then on a visit). Spencer returned to the toll house and killed both of them. The crime was enacted for the purposes of robbery, and Spencer gained re-admittance under a pretence that a drove of cattle wished to pass that way. Spencer was interrupted by travellers in the act of dragging one body across the road towards the River Ryton, and arrested shortly thereafter by a search party. He was executed following a trial at Nottingham Assizes, and his body afterwards hung in a gibbet cage on a slope south of the Ryton now denominated Gibbet Hill. The reputed upright of the gibbet is preserved in Doncaster Museum 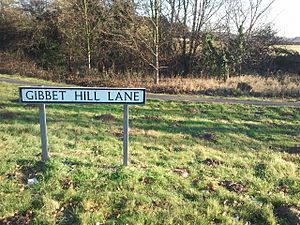 Gibbet Hill Lane refers to the grim events of 1779

All content from Kiddle encyclopedia articles (including the article images and facts) can be freely used under Attribution-ShareAlike license, unless stated otherwise. Cite this article:
Scrooby Facts for Kids. Kiddle Encyclopedia.