Col. William Brewster III (1566 – April 10, 1644) was an English official who was a passenger on the Mayflower in 1620. He was a religious leader both in Europe and in Plymouth Colony. He was also one of the signers of the Mayflower Compact.

Brewster studied at Peterhouse, Cambridge. Cambridge was a university where many people wanted to change the Church of England. People who agreed with this started different religions. They were called Separatists. In England, Separatists were put into jail.

Brewster worked for a time for William Davison in the Netherlands. Davison went to jail because he was a Separatist. When Davison went to jail, Brewster went back home to Scrooby for a time. He became a postmaster. Brewster began a Separatist church in his house. In 1607, He also went to jail for a short time for doing this in. Brewster and other members of the Church decided to move to Netherlands in 1608. They hoped that would be able to practice their religion there. To leave England without permission was illegal, so they left in secret. In 1609, he was chosen as the leader of the congregation.

In Leiden, Brewster taught English. In 1616 he was a printer and made religious books for sale in England. In 1619, Brewster and Edward Winslow published a religious booklet which disagreed with King James I and the Church of England. The King ordered Brewster's arrest. He was forced to hide. The printing press was taken by the English ambassador and Brewster's partner was arrested. The congregation had already decided to leave Leiden for the New World. While Brewster was in hiding, the other members of the church looked to others such as John Carver and Robert Cushman to make the plans. Brewster escaped and, with the help of Cushman, he and Cushman were able to get aboard the Mayflower with their friends. His wife and two of his sons, Love and Wrestling, were also passengers.

The Mayflower voyage and the New World

The Mayflower left Plymouth, England on 16 September 1620. There were 102 passengers and 30–40 crew. On 19 November 1620, the Mayflower reached land at Cape Cod hook. They landed on November 21. They wrote the Mayflower Compact, which made rules on how they would live and treat each other. 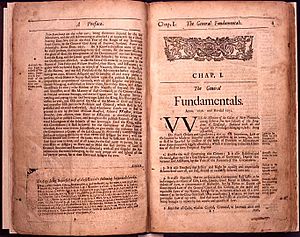 The Book of the General Laws of the Inhabitants of the Jurisdiction of New-Plimouth. Boston: Samuel Green 1685

Brewster became the senior religious leader at Plymouth Colony. He also served as an advisor to Governor William Bradford.

Brewster's son Jonathan, arrived the next year on the ship Fortune. Brewster's daughters Patience and Fear arrived aboard the Anne.

Brewster was given land on the islands of Boston Harbor. Four of those islands are named after him. In 1632, Brewster also received lands in nearby Duxbury and moved there from Plymouth Colony to build a farm.

An epidemic killed many English and Indians in the region. William Brewster lost two daughters, Fear and Patience in 1634.

William Brewster died and was buried on 10 April 1644 at Burial Hill, Plymouth, Massachusetts. There is a memorial for him which says it is in honor of "Elder William Brewster Patriarch (father) of the Pilgrims and their Ruling Elder 1609–1644". The burial place of his wife Mary is unknown.

All content from Kiddle encyclopedia articles (including the article images and facts) can be freely used under Attribution-ShareAlike license, unless stated otherwise. Cite this article:
William Brewster Facts for Kids. Kiddle Encyclopedia.