The Mayflower was a ship which is famous for its sailing to North America in 1620 bringing pilgrims and other settlers to create the Plymouth colony in Massachusetts.

This is a list of the passengers who traveled on that voyage in 1620. Some of these people were looking for a new home so that they could practice their own religion. Others were passengers who came for other reasons.

Thirteen of the eighteen persons in this category were attached to Pilgrim families, the other five were with non-Pilgrim families. Four of those listed here were small children, given over by Samuel More to Thomas Weston and then to agents John Carver and Robert Cushman, who assigned them to senior Mayflower Pilgrims to be classed as indentured servants. 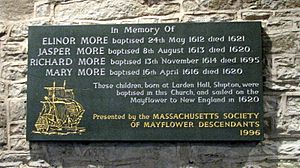 At least two dogs are known to have participated in the settling of Plymouth. Edward Winslow writes that a female dog which is called an English Mastiff, and a small English Springer Spaniel came ashore on the first explorations of what is now Provincetown, Massachusetts. There may have been other animals on the Mayflower, but only these two dogs had been mentioned.

All content from Kiddle encyclopedia articles (including the article images and facts) can be freely used under Attribution-ShareAlike license, unless stated otherwise. Cite this article:
List of Mayflower passengers Facts for Kids. Kiddle Encyclopedia.