Northamptonshire ( or abbreviated Northants.), archaically known as the County of Northampton, is a county in the East Midlands of England. In 2011, it had a population of 629,000. The county is administered by Northamptonshire County Council and seven non-metropolitan district councils.

Apart from the county town of Northampton, other large population centres include Kettering, Corby, Wellingborough, Rushden and Daventry. Northamptonshire's county flower is the cowslip.

Much of Northamptonshire's countryside appears to have remained somewhat intractable with regards to early human occupation, resulting in an apparently sparse population and relatively few finds from the Palaeolithic, Mesolithic and Neolithic periods. In about 500 BC the Iron Age was introduced into the area by a continental people in the form of the Hallstatt culture, and over the next century a series of hill-forts were constructed at Arbury Camp, Rainsborough camp, Borough Hill, Castle Dykes, Guilsborough, Irthlingborough, and most notably of all, Hunsbury Hill. There are two more possible hill-forts at Arbury Hill (Badby) and Thenford.

The Roman road of Watling Street passed through the county, and an important Roman settlement, Lactodorum, stood on the site of modern-day Towcester. There were other Roman settlements at Northampton, Kettering and along the Nene Valley near Raunds. A large fort was built at Longthorpe.

After the Romans left, the area eventually became part of the Anglo-Saxon kingdom of Mercia, and Northampton functioned as an administrative centre. The Mercians converted to Christianity in 654 AD with the death of the pagan king Penda. From about 889 the area was conquered by the Danes (as at one point almost all of England was, except for Athelney marsh in Somerset) and became part of the Danelaw - with Watling Street serving as the boundary - until being recaptured by the English under the Wessex king Edward the Elder, son of Alfred the Great, in 917. Northamptonshire was conquered again in 940, this time by the Vikings of York, who devastated the area, only for the county to be retaken by the English in 942. Consequently, it is one of the few counties in England to have both Saxon and Danish town-names and settlements.

The county was first recorded in the Anglo-Saxon Chronicle (1011), as Hamtunscire: the scire (shire) of Hamtun (the homestead). The "North" was added to distinguish Northampton from the other important Hamtun further south: Southampton - though the origins of the two names are in fact different.

Rockingham Castle was built for William the Conqueror and was used as a Royal fortress until Elizabethan times. In 1460, during the Wars of the Roses, the Battle of Northampton took place and King Henry VI was captured. The now-ruined Fotheringhay Castle was used to imprison Mary, Queen of Scots, before her execution. 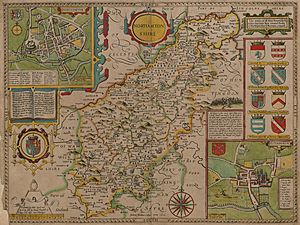 During the English Civil War, Northamptonshire strongly supported the Parliamentarian cause, and the Royalist forces suffered a crushing defeat at the Battle of Naseby in 1645 in the north of the county. King Charles I was imprisoned at Holdenby House in 1647.

In 1823 Northamptonshire was said to "[enjoy] a very pure and wholesome air" because of its dryness and distance from the sea. Its livestock were celebrated: "Horned cattle, and other animals, are fed to extraordinary sizes: and many horses of the large black breed are reared."

Nine years later, the county was described as "a county enjoying the reputation of being one of the healthiest and pleasantest parts of England" although the towns were "of small importance" with the exceptions of Peterborough and Northampton. In summer, the county hosted "a great number of wealthy families... country seats and villas are to be seen at every step." Northamptonshire is still referred to as the county of "spires and squires" because of the numbers of stately homes and ancient churches.

In the 18th and 19th centuries, parts of Northamptonshire and the surrounding area became industrialised. The local specialisation was shoemaking and the leather industry and by the end of the 19th century it was almost definitively the boot and shoe making capital of the world.

Corby was designated a new town in 1950 and Northampton followed in 1968. As of 2005[update] the government is encouraging development in the South Midlands area, including Northamptonshire.

The Soke of Peterborough was historically associated with and considered part of Northamptonshire, as the county diocese is focused upon the cathedral there. However, Peterborough had its own Quarter Sessions and, later, county council, and in 1965 it was merged with the neighbouring small county of Huntingdonshire. Under the Local Government Act 1972 the city of Peterborough became a district of Cambridgeshire.

Northamptonshire is a landlocked county located in the southern part of the East Midlands region which is sometimes known as the South Midlands. The county contains the watershed between the River Severn and The Wash while several important rivers have their sources in the north-west of the county, including the River Nene, which flows north-eastwards to The Wash, and the "Warwickshire Avon", which flows south-west to the Severn. In 1830 it was boasted that "not a single brook, however insignificant, flows into it from any other district". The highest point in the county is Arbury Hill at 225 metres (738 ft).

As of 2010 there are 16 settlements in Northamptonshire with a town charter:

Like the rest of the British Isles, Northamptonshire has an oceanic climate (Köppen climate classification). The table below shows the average weather for Northamptonshire from the Moulton weather station. 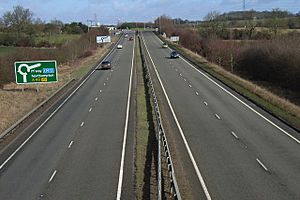 Brackley bypass on the A43

The gap in the hills at Watford Gap meant that many south-east to north-west routes passed through Northamptonshire. The Roman Road Watling Street (now part of the A5) passes through here, as did later canals, railways and major roads.

Major national roads including the M1 motorway (London to Leeds) and the A14 (Rugby to Ipswich), provide Northamptonshire with transport links, both north–south and east–west. The A43 joins the M1 to the M40 motorway, passing through the south of the county to the junction west of Brackley, and the A45 links Northampton with Wellingborough and Peterborough.

The county road network, managed by Northamptonshire County Council includes the A45 west of the M1 motorway, the A43 between Northampton and the county boundary near Stamford, the A361 between Kilsby and Banbury (Oxon) and all B, C and Unclassified Roads. Since 2009 these highways have been managed on behalf of the county council by MGWSP, a joint venture between May Gurney and WSP. 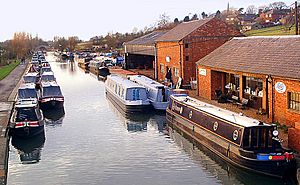 Two major canals – the Oxford and the Grand Union – join in the county at Braunston. Notable features include a flight of 17 locks on the Grand Union at Rothersthorpe, the canal museum at Stoke Bruerne, and a tunnel at Blisworth which, at 2,813 metres (3,076 yd), is the third-longest navigable canal tunnel on the UK canal network.

A branch of the Grand Union Canal connects to the River Nene in Northampton and has been upgraded to a "wide canal" in places and is known as the Nene Navigation. It is famous for its guillotine locks. 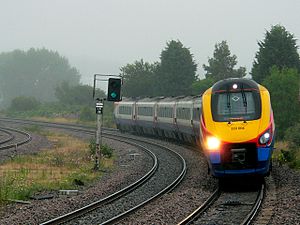 Before nationalisation of the railways in 1948 and the creation of British Railways, three of the "Big Four" railway companies operated in Northamptonshire: the London, Midland and Scottish Railway, London and North Eastern Railway and Great Western Railway. Only the Southern Railway was not represented. As of 2010 it is served by Virgin Trains, London Midland, Chiltern Railways and East Midlands Trains.

Corby was described as the largest town in Britain without a railway station. The railway running through the town from Kettering to Oakham in Rutland was previously used only by freight traffic and occasional diverted passenger trains that did not stop at the station. The line through Corby was once part of a main line to Nottingham through Melton Mowbray, but the stretch between Melton and Nottingham was closed in 1968. In the 1980s, an experimental passenger shuttle service ran between Corby and Kettering but was withdrawn a few years later. On 23 February 2009, a new railway station opened, providing direct hourly access to London St Pancras. Following the opening of Corby Station, Rushden then became the largest town in the United Kingdom without a direct railway station.

Railway services in Northamptonshire were reduced by the Beeching Axe in the 1960s. Closure of the line connecting Northampton to Peterborough by way of Wellingborough, Thrapston, and Oundle left eastern Northamptonshire devoid of railways. Part of this route was reopened in 1977 as the Nene Valley Railway. A section of one of the closed lines, the Northampton to Market Harborough line, is now the Northampton & Lamport heritage railway, while the route as a whole forms a part of the National Cycle Network, as the Brampton Valley Way.

As early as 1897 Northamptonshire would have had its own Channel Tunnel rail link with the creation of the Great Central Railway, which was intended to connect to a tunnel under the English Channel. Although the complete project never came to fruition, the rail link through Northamptonshire was constructed, and had stations at Charwelton, Woodford Halse, Helmdon and Brackley. It became part of the London and North Eastern Railway in 1923 (and of British Railways in 1948) before its closure in 1966.

In June 2009 the Association of Train Operating Companies (ATOC) recommended opening a new station on the former Irchester railway station site for Rushden, Higham Ferrers and Irchester, called Rushden Parkway. Network Rail is looking at electrifying the Midland Main Line north of Bedford. A open access company has approached Network Rail for services to Oakham in Rutland to London via the county.

The Rushden, Higham and Wellingborough Railway would like to see the railway fully reopen between Wellingborough and Higham Ferrers. As part of the government-proposed High Speed 2 railway line (between London and Birmingham), the high-speed railway line will go through the southern part of the county but with no station built. 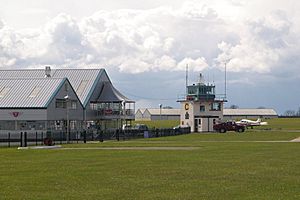 Most buses are operated by Stagecoach in Northants. Some town area routes have been named the Corby Star, Connect Kettering, Connect Wellingborough and Daventry Dart; the last three of these routes have route designations that include a letter (such as A, D1, W1, W2, etc.

Sywell Aerodrome, on the edge of Sywell village, has three grass runways and one concrete all-weather runway. It is, however, only 1000 metres long and therefore cannot be served by passenger jets.

Rock and pop bands originating in the area have included Bauhaus, The Departure, New Cassettes, Raging Speedhorn and Defenestration.

Kinky Boots, the 2005 British-American film and subsequent stage musical adaptation, was based on the true story of a traditional Northamptonshire shoe factory.

Richard Coles, the English Musician who partnered in the 1980s with Jimmy Somerville to create The Communards band. They made three Top Ten Hits and made the Number 1 record in 1986 with their song 'Don't Leave me this way'. In 2012, The University of Northampton awarded him an honorary doctorate. He is now a vicar of Finedon in Northamptonshire.

All content from Kiddle encyclopedia articles (including the article images and facts) can be freely used under Attribution-ShareAlike license, unless stated otherwise. Cite this article:
Northamptonshire Facts for Kids. Kiddle Encyclopedia.