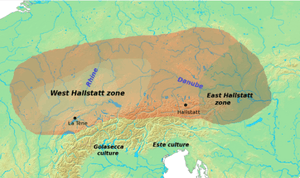 The Hallstatt culture can be split into an eastern an a western part. The dividing line runs through the Czech Republic and Austria, between 14 and 15 degrees east 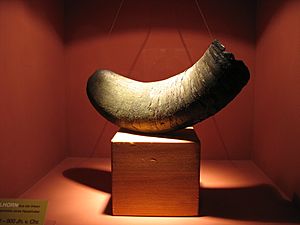 Drinking Horn from the Hallstatt culture

Brooches found in a grave of the Hallstatt culture

The Hallstatt culture is named after Hallstatt, a city in Austria in which the first artifacts were found. It lasted from about 1200 BC to about 275 BC.

There were different periods that are now told apart mainly by the kinds of brooches used. The brooches changed rather rapidly and permit a good estimate. Hallstatt culture sites have been found in the east of France, in Switzerland, in the south of Germany, in Austria, in Slovenia and Croatia, northwestern Hungary, southwestern Slovakia and southern Moravia.

In this time, the social structure developed into a hierarchy. That can be documented by various things that were added to graves, such as at Magdalenenberg. In the Bronze Age, people lived in big settlements. As iron became available, trade routes changed. A new upper class could establish itself. Unlike before, the upper class liked to live in big houses in the countryside to show their power.

Funerary cults also changed, from cremation burials, to burials with sarcophagi. The new upper class used its wealth for import goods, mostly from the Mediterranean. People started settling there around the 2nd millennium BC.

All content from Kiddle encyclopedia articles (including the article images and facts) can be freely used under Attribution-ShareAlike license, unless stated otherwise. Cite this article:
Hallstatt culture Facts for Kids. Kiddle Encyclopedia.