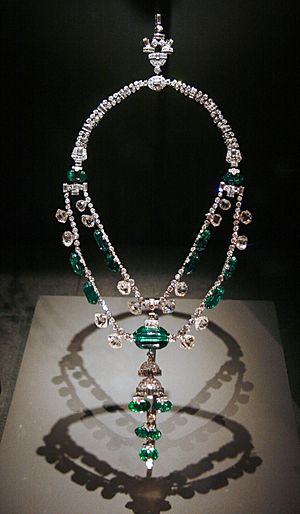 The Indore necklace made in India pre-20th century, now at the Smithsonian Institution

A necklace is a jewellery item worn round the neck. It is of ancient origin: all civilisations have worn them. They usually figure precious metals and jewels, but may be made of colourful beads.

The emeralds threaded onto the necklace were mined in Colombia. The diamonds were mined in India. The necklace's gemstones are believed to have been cut in India in the 17th century, but the early history of the necklace itself is unknown. The first recorded owner of the piece was Tukoji Rao III, Maharaja of Indore (a Princely State in India) in the early 20th century. On his abdication, the necklace was passed to his son, Yashvantrao II, who took up his father's throne. The necklace is sometimes called, though with no reason, the Spanish Inquisition necklace.

All content from Kiddle encyclopedia articles (including the article images and facts) can be freely used under Attribution-ShareAlike license, unless stated otherwise. Cite this article:
Necklace Facts for Kids. Kiddle Encyclopedia.