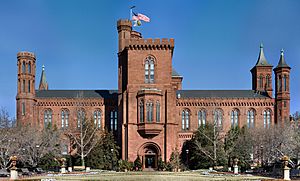 The Smithsonian Institution is an educational and research institute and museum complex. Most of the institution is in Washington, D.C., but its 19 museums, zoo, and eight research centers include sites in New York City, Virginia, Panama, and elsewhere. It has over 137 million items in its collections.

The Smithsonian Institution was founded for the "increase and diffusion" of knowledge by a bequest to the United States by the British scientist James Smithson (1765–1829), who had never visited the United States himself. In Smithson's will, he stated that should his nephew, Henry James Hungerford, die without heirs, the Smithson estate would go to the United States of America for creating an "Establishment for the increase & diffusion of Knowledge among men". After the nephew died without heirs in 1835, President Andrew Jackson informed Congress of the bequest, which amounted to 104,960 gold sovereigns, or USD 500,000 ($9,235,277 in 2005 U.S. dollars after inflation).

Eight years later, Congress passed an act establishing the Smithsonian Institution. It is administered and funded by the U.S. government, and by funds from its endowment, contributions, and profits from its shops and magazine.

The Smithsonian Institution Building on the National Mall is known as "The Castle", because its design looks similar to a European castle.

Though the Smithsonian's first leader (called "Secretary"), Joseph Henry, wanted the Institution to be a center for scientific research, before long it became the depository for various Washington and U.S. government collections.

The voyage of the U.S. Navy went around the world between 1838 and 1842. The United States Exploring Expedition collected thousands of animal specimens, herbs, shells, minerals, tropical birds, jars of seawater and ethnographic specimens from the South Pacific. These specimens and artefacts became part of the Smithsonian collections. So did those collected by the military and civilian surveys in the American West.

A variety of aircraft displayed at the National Air and Space Museum. Most notable: Ford Trimotor and Douglas DC-3 (top and second from top)

In addition, there are many museums that are Smithsonian affiliates.

All content from Kiddle encyclopedia articles (including the article images and facts) can be freely used under Attribution-ShareAlike license, unless stated otherwise. Cite this article:
Smithsonian Institution Facts for Kids. Kiddle Encyclopedia.