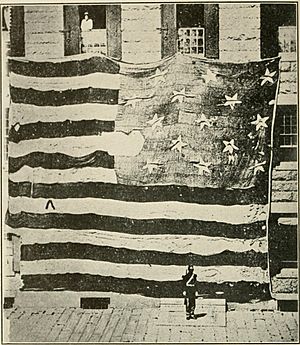 Flag that flew over Fort McHenry in 1814, photographed in 1873 in the Boston Navy Yard by George Henry Preble.

The Star-Spangled Banner, or the Great Garrison Flag, was the garrison flag that flew over Fort McHenry in Baltimore Harbor during the naval portion of the Battle of Baltimore during the War of 1812. It is on exhibit at the National Museum of American History, Smithsonian Institution. Seeing the flag flying over Fort McHenry on the morning of September 14, 1814, after the battle ended, Francis Scott Key was inspired to write the poem "Defence of Fort M'Henry". These words were written by Key and set to the tune of "To Anacreon in Heaven" by John Stafford Smith, a popular song at the time. It was not until 1931 that the song became the national anthem of the United States.

More broadly, a garrison flag is a U.S. Army term for an extra-large national flag that is flown on Sundays, holidays, and special occasions. The U.S. Navy term is "holiday colors".

With fifteen stripes, the Star-Spangled Banner remains the only official American flag to bear more than thirteen stripes.

In Baltimore's preparation for an expected attack on the city, Fort McHenry was made ready to defend the city's harbor. When Major George Armistead expressed the desire for a very large flag to fly over the fort, General John S. Stricker and Commodore Joshua Barney placed an order with a prominent Baltimorean flagmaker for two oversized American Flags. The larger of the two flags would be the Great Garrison Flag, the largest battle flag ever flown at the time. The smaller of the two flags would be the Storm Flag, to be more durable and less prone to fouling in inclement weather.

Available documentation shows that this flag was sewn by local flagmaker Mary Young Pickersgill under a government commission in 1813 at a cost of $405.90 (4466). George Armistead, the commander of Fort McHenry, specified "a flag so large that the British would have no difficulty seeing it from a distance".

Mary Pickersgill stitched the flag from a combination of cotton and dyed English wool bunting, assisted by her daughter, two nieces, and an African American indentured servant, Grace Wisher. The flag has fifteen horizontal red and white stripes, as well as fifteen white stars in the blue field. The two additional stars and stripes, approved by the United States Congress's Flag Act of 1794, represent Vermont and Kentucky's entrance into the Union. The stars are arranged in vertical rows, with five horizontal rows of stars, offset, each containing three stars. At the time, the practice of adding stripes (in addition to stars) with the induction of a new state had not yet been discontinued.

The flag originally measured 30 by 42 feet (9.1 by 12.8 m). Each of the fifteen stripes is 2 feet (0.61 m) wide, and each of the stars measures about 2 feet (0.61 m) in diameter. After the battle, the Armistead family occasionally gave away pieces of the flag as souvenirs and gifts; this cutting, along with deterioration from continued use, removed several feet of fabric from the flag's fly end, and it now measures 30 by 34 feet (9.1 by 10.4 m). The flag currently has only fourteen stars—the fifteenth star was similarly given as a gift, but its recipient and current whereabouts are unknown.

The Flag was flown over the fort when 5,000 British soldiers and a fleet of 19 ships attacked Baltimore on September 12, 1814. The bombardment turned to Fort McHenry on the evening of September 13, and continuous shelling occurred for 25 hours under heavy rain. When the British ships were unable to pass the fort and penetrate the harbor, the attack was ended, and on the morning of September 14, when the battered flag still flew above the ramparts, it was clear that Fort McHenry remained in American hands. This revelation was famously captured in poetry by Key, an American lawyer, and amateur poet. Being held by the British on a truce ship in the Patapsco River, Key observed the battle from afar. When he saw the Garrison Flag still flying at the dawn of the morning of the 14th, he composed a poem he originally titled "Defence of Fort McHenry". The poem would be put to the music of a common tune, retitled "The Star-Spangled Banner", and a portion of it would later be adopted as the United States National Anthem. Since its arrival at the Smithsonian, the flag has undergone multiple preservation efforts.

A 2-inch by 5-inch fragment of the flag—white and red, with a seam down the middle—was sold at auction in Dallas, TX on November 30, 2011, for $38,837: the snippet was, presumably, cut from the famous flag as a souvenir in the mid-19th century. The framed remnant came with a faded, hand-written note attesting it was "A piece of the Flag which floated over Fort McHenry at the time of the bombardment when Key's (sic) composed the Song of the Star Spangled Banner, presented by Sam Beth Cohen." 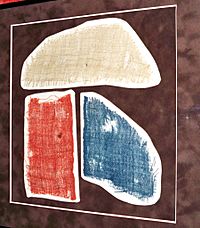 In addition to the original flag on display, the Smithsonian also features pieces from the flag that had been snipped off over the years as patriotic mementos

The flag that flew during that episode in history became a significant artifact. It remained in the possession of Major Armistead, who was promoted to brevet lieutenant colonel, and his family for many years. Eben Appleton, Colonel Armistead's grandson, inherited the flag in 1878. In 1907, he lent it to the Smithsonian Institution, and in 1912 it was made a formal gift. Today it is permanently housed in the National Museum of American History, one of the Smithsonian Institution museums on the National Mall in Washington, D.C. The flag was given to the museum in 1912, and has undergone multiple restoration efforts after being originally restored by Amelia Fowler in 1914.

Due to environmental and light damage, a four-phase restoration project began in May 1999. In the first phase, the team removed the linen support backing that was attached to the flag during the 1914 restoration. The second phase consisted of the most comprehensive, detailed examination of the condition and construction of the Star-Spangled Banner to date, which provided critical information for later work. This included scientific studies with infrared spectrometry, electron microscopy, mechanical testing, and determination of amino acid content by a New Zealand scientist, and infrared imaging by a NASA scientist. Planning and executing a cleaning treatment for the flag following scientific analysis was the third phase. In the fourth and final phase of the project, curators, scientists, and conservators developed a long-term preservation plan. The restoration was completed in 2008 at a total cost in excess of $21 million.

Following the reopening of the National Museum of American History on November 21, 2008, the flag is now on display in a two-story display chamber that allows it to lie at a 10-degree angle in dim light. The Smithsonian has created a permanent exhibition to document the flag's history and significance, called "The Star-Spangled Banner: The Flag that Inspired the National Anthem". Visitors are allowed a clear view of the flag, while it remains protected in a controlled environment.

The National Museum of American History produced an online exhibition in conjunction with the reopening of Flag Hall in 2008. An interactive component allows site visitors to closely explore features of the flag in detail, download an audio-descriptive tour of the exhibition for the visually-impaired, and hear the song performed on original instruments from the National Museum of American History's collection.

All content from Kiddle encyclopedia articles (including the article images and facts) can be freely used under Attribution-ShareAlike license, unless stated otherwise. Cite this article:
Star-Spangled Banner (flag) Facts for Kids. Kiddle Encyclopedia.