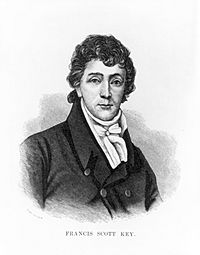 Francis Scott Key (August 1, 1779 - January 11, 1843) was an American lawyer and poet. He is best known for writing a poem which later became the words of "The Star-Spangled Banner", the national anthem of the United States of America.

His mother was Ann Phoebe Penn Dagworthy (Charlton) and his father was Captain John Ross Key. He graduated from St. John's College in Annapolis, Maryland in 1796.

Key was an owner of slaves, and in the later administration of Andrew Jackson he was the United States Attorney in Washington, D.C.

All content from Kiddle encyclopedia articles (including the article images and facts) can be freely used under Attribution-ShareAlike license, unless stated otherwise. Cite this article:
Francis Scott Key Facts for Kids. Kiddle Encyclopedia.