In God We Trust facts for kids 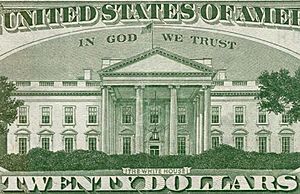 "In God We Trust" on the twenty dollar bill

"In God We Trust" is the current national motto of the United States of America. It was so designated by an act of Congress in 1956 and officially supersedes "E Pluribus Unum" (From Many, One) according to US Code, Title 36.

The final stanza of "The Star-Spangled Banner," written in 1814 by Francis Scott Key (and later adopted as the U.S. National Anthem), contains one of the earliest references to a variation of the phrase: "...And this be our motto: "In God is our trust."

The most common place where the motto is observed in daily life is on the money of the United States. The first United States coin to bear this national motto was the 1864 two-cent piece. It did not appear on paper money until the 1950s.

The motto has been in continuous use on the one-cent coin since 1909 and on the ten-cent Dime since 1916. It also has appeared on all gold coins and silver dollar coins, half-dollar coins, and quarter-dollar coins struck since July 1, 1908.

In God We Trust is also the official state motto of the state of Florida, and is found on the Seal of Florida.

The motto In God We Trust was placed on United States coins largely because of the increased religious sentiment existing during the American Civil War. Secretary of the Treasury Salmon P. Chase received many appeals from devout persons throughout the country, urging that the United States recognize God on United States coins. From Treasury Department records, it appears that the first such appeal came in a letter dated November 13, 1861.

All content from Kiddle encyclopedia articles (including the article images and facts) can be freely used under Attribution-ShareAlike license, unless stated otherwise. Cite this article:
In God We Trust Facts for Kids. Kiddle Encyclopedia.