Siloam Springs is a city in Benton County, Arkansas, United States. The city shares a border on the Arkansas-Oklahoma state line with the city of West Siloam Springs, Oklahoma, which is within the Cherokee Nation territory. The town was founded in 1882 and was characterized by the purported healing powers of the spring water feeding Sager Creek and trading with nearby Native American tribes. John Brown University (JBU) was founded in 1919 as a private, interdenominational, Christian liberal arts college in the city. Today, Siloam Springs is known for its efforts to preserve and revitalize the city's historic downtown and as a promoter of the arts via Sager Creek Arts Center and the JBU art gallery. The community is located on the western edge of the growing Northwest Arkansas metropolitan area and has had a population increase of 47% to 15,039 between the 2000 and 2010 censuses.

In 2012, the city was named one of the 20 best small towns in America by Smithsonian magazine 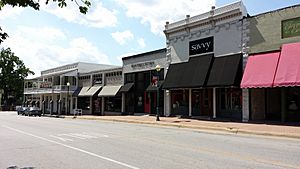 Osage Indians were the known first inhabitants of the area. Siloam Springs' first white settlers were of German and Scots-Irish origin. Simon Sager is considered the founder of the town, then known as Hico. 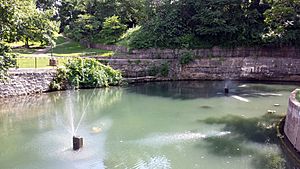 The area is located in the region of the country where the southern plains meet the Ozark Mountains. The city sits atop a plateau with many dogwood trees growing across the landscape. Siloam Springs is made up of Siloam Springs, Arkansas, and West Siloam Springs, Oklahoma. The latter is in the territory of the Cherokee Nation in northeastern Oklahoma.

A perennial creek, named after the founder, Sager Creek, flows through the downtown area.

The Fayetteville–Springdale–Rogers Metropolitan Area consists of three Arkansas counties: Benton, Madison, and Washington, and McDonald County, Missouri. The area had a population of 347,045 at the 2000 census which had increased to 463,204 by the 2010 Census (an increase of 33.47 per cent). Siloam Springs is at the extreme western edge of this area, connected to the principal cities by Highway 412.

The climate in this area is characterized by hot, humid summers and generally mild to cool winters. According to the Köppen Climate Classification system, Siloam Springs has a humid subtropical climate, abbreviated "Cfa" on climate maps.

Precipitation is weakly seasonal, with a bimodal pattern: wet seasons in the spring and fall, and relatively drier summers and winters, but some rain in all months. The spring wet season is more pronounced than fall, with the highest rainfall in May. This differs slightly from the climate in central Arkansas, where the fall wet season is more comparable to spring.

There were 3,894 households out of which 34.8% had children under the age of 18 living with them, 53.8% were married couples living together, 10.6% had a female householder with no husband present, and 32.0% were non-families. 26.9% of all households were made up of individuals and 11.9% had someone living alone who was 65 years of age or older. The average household size was 2.57 and the average family size was 3.11.

As of 2009[update], there were 52 churches that called Siloam Springs home by address. There are reports that Siloam Springs has a record for most number churches per capita, and while the ratio is higher than average, it has never been verified through reliable documentation. (Despite the large number of churches, the town does contain a small atheist/non-religious community.) Major employers in Siloam Springs include Gates Corporation, La-Z-Boy, DaySpring (a subsidiary of Hallmark Cards), Sager Creek Vegetable Company (formally Allen's Canning), Cobb-Vantress, and John Brown University.

All content from Kiddle encyclopedia articles (including the article images and facts) can be freely used under Attribution-ShareAlike license, unless stated otherwise. Cite this article:
Siloam Springs, Arkansas Facts for Kids. Kiddle Encyclopedia.