Kids Encyclopedia Facts
Not to be confused with Benton, Arkansas.

Benton County is located in the northwestern corner of the U.S. state of Arkansas. As of the 2020 census, the population was 284,333, making it the second-most populous county in Arkansas. The county seat is Bentonville. The county was formed on September 30, 1836, and was named after Thomas Hart Benton, a U.S. Senator from Missouri. In 2012, Benton County voters elected to make the county wet, or a non-alcohol prohibition location. Benton County is part of the Northwest Arkansas region. 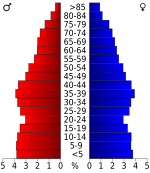 Politically, Benton County is arguably one of the most Republican-Leaning Counties in Arkansas. Benton County has not voted completely Democrat in a Presidential election since 1948, when former Missouri senator Harry S. Truman won Benton County along with winning Arkansas as a whole.

The historic Trail of Tears is on US highways 62 and 71 and connects with U.S. Route 412 in nearby Washington County.

The Arkansas and Missouri Railroad parallels US Highways 62 and 71 in the county. 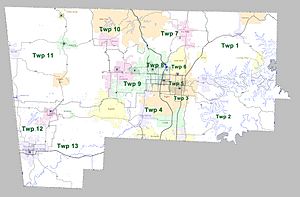 Townships in Benton County, Arkansas as of 2010

Note: Most Arkansas counties have names for their townships. Benton County, however, has numbers instead of names.

Townships in Arkansas are the divisions of a county. Each township includes unincorporated areas; some may have incorporated cities or towns within part of their boundaries. Arkansas townships have limited purposes in modern times. However, the United States Census does list Arkansas population based on townships (sometimes referred to as "county subdivisions" or "minor civil divisions"). Townships are also of value for historical purposes in terms of genealogical research. Each town or city is within one or more townships in an Arkansas county based on census maps and publications. The townships of Benton County are listed below; listed in parentheses are the cities, towns, and/or census-designated places that are fully or partially inside the township.

All content from Kiddle encyclopedia articles (including the article images and facts) can be freely used under Attribution-ShareAlike license, unless stated otherwise. Cite this article:
Benton County, Arkansas Facts for Kids. Kiddle Encyclopedia.