Pea Ridge National Military Park is a United States National Military Park located in northwest Arkansas near the Missouri border. The park protects the site of the Battle of Pea Ridge, fought March 7 and 8, 1862. The battle was a victory for the Union, and helped it gain control of the crucial border state of Missouri. 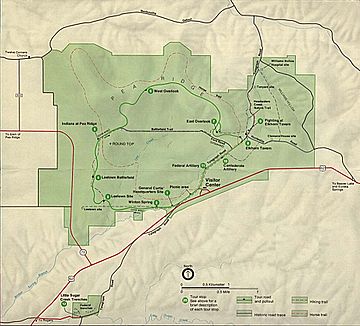 The 4,300-acre (17 km2) Pea Ridge National Military Park was created by an act of Congress in 1956 to preserve the battlefield of the 1862 Battle of Pea Ridge. It was dedicated as a national park during the nation's Civil War Centennial in 1963.

In 1956, the Arkansas congressional delegation proposed legislation to make Pea Ridge a national military park. This was a major breakthrough in American Civil War battlefield preservation. At that time, under the National Park Service classification system, only 1-acre (4,000 m2) should have been preserved, along with a monument. On July 20, 1956, Congress enacted legislation to accept a 5,000-acre (20 km2) donation from the state of Arkansas.

In acquiring the land for the park, the government purchased or used eminent domain on dozens of farms and residences of various sizes, ranging from a few acres to the large Winton Springs estate. Many of the houses and structures were sold and moved off of park property, including some that still stand in nearby Pea Ridge. All other remaining structures, with the exception of the historic Elkhorn Tavern, were demolished by the park, including the elaborate Winton Springs mansion.

Many Union and Confederate veterans attended several reunions at the Pea Ridge battlefield long before it was a park. The first of these reunions was held in 1887, twenty-five years after the battle. The reunions promoted not only remembrance, but healing between the white soldiers of each side. The veterans dedicated the first monuments on the battlefield to both the Union and Confederate dead. Historian David W. Blight notes in his book Race and Reunion that in such postwar reconciliation, outstanding issues related to the condition and future of freedmen and racial justice were overlooked. These monuments are still located within the park today.

The park is acknowledged as one of the best preserved Civil War battlefields. The park features a visitor center and museum, a driving tour, the restored battlefields, hiking trails, a portion of the pre-war Old Telegraph/Wire Road, approximately 2.5 miles (4.0 km) of the Trail of Tears as followed by some members of the Cherokee Nation, and the restored Elkhorn Tavern, which was the epicenter of much of the battle.

All content from Kiddle encyclopedia articles (including the article images and facts) can be freely used under Attribution-ShareAlike license, unless stated otherwise. Cite this article:
Pea Ridge National Military Park Facts for Kids. Kiddle Encyclopedia.