As per the 2016 United States Census Bureau estimates, NWA is the 105th largest metropolitan statistical area in the United States (525,032 residents) and the 22nd fastest growing in the US. The MSA covers 3,213.01 sq mi (8,322 km2), located within the Boston Mountains and Springfield Plateau subsets of The Ozarks.

Northwest Arkansas doubled in population between 1990 and 2010. Growth has been driven by the three Fortune 500 companies based in NWA: Walmart Stores, Inc., Tyson Foods, and J.B. Hunt Transport Services, Inc., as well as over 1,300 suppliers and vendors drawn to the region by these large businesses and NWA's business climate. The region has also seen significant investment in amenities, including the Crystal Bridges Museum of American Art, the Walmart AMP, and the NWA Razorback Regional Greenway.

Constituent counties of the MSA include: 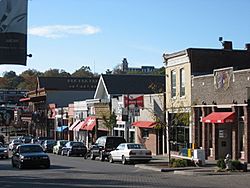 Fayetteville is a city in Washington County and home to the University of Arkansas. As of the 2010 census, the city had a total population of 76,899. The city is the third most populous in Arkansas and serves as the county seat of Washington County. It's also known for Dickson Street, perhaps the most prominent entertainment district in the state of Arkansas, which itself contains the Walton Arts Center. Blocks from Dickson Street is the Fayetteville Historic Square, which hosts the nation's number one ranked Fayetteville's Farmer's Market. Fayetteville was also ranked 8th on Forbes Magazine's Top 10 Best Places in America for Business and Careers in 2007.

Springdale is a city in Washington and Benton Counties. According to 2010 Census Bureau, the population of the city is 73,123. Springdale is currently Arkansas's fourth-largest city, behind Little Rock, Fort Smith, and Fayetteville. Springdale is the location of the headquarters of Tyson Foods Inc., the largest meat producing company in the world, and has been dubbed the "Chicken Capital of the World" by several publications. In 2008, the Wichita Wranglers of AA minor league baseball's Texas League moved to Springdale and play in Arvest Ballpark as the Northwest Arkansas Naturals.

Rogers is a city in Benton County. As of the 2010 census, the city is the eighth most populous in the state, with a total population of 58,895. Rogers is famous as the location of the first Wal-Mart. In June 2007, BusinessWeek magazine ranked Rogers 18th in the 25 best affordable suburbs in the South. In 2010, CNN Money magazine ranked Rogers as the 10th Best Place to Live in the United States. The city is the home town of American country music singer/songwriter Joe Nichols, and Marty Perry, as well as David Noland. It is also where comedian Will Rogers married Betty Blake. 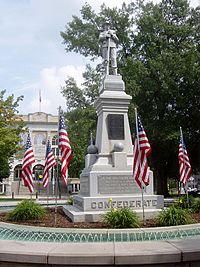 Monument in homage to James H. Berry, the Confederacy, and the Southern Soldier, located in the town square of Bentonville.

Bentonville is a city in Benton County. At the 2010 census, the population was 38,284, up from 20,308 in 2000 ranking it as the state's 10th largest city. Bentonville also is the county seat of Benton County and home to the headquarters of Wal-Mart, which is the largest retailer in the world. Bentonville has the location of the Crystal Bridges Museum of American Art. Founded by Sam Walton's daughter Alice Walton and designed by world-renowned architect Moshe Safdie, this museum is home to some of America's finest works of art. 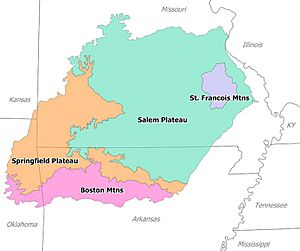 The split between the Springfield Plateau and the Boston Mountains occurs in the center of Washington County, Arkansas very near Fayetteville. The rough, mountainous terrain south of Fayetteville is the Boston Mountains while the more-habitable Springfield Plateau contains the cities of Springdale, Bentonville and Rogers to the north.
Main page: The Ozarks

NWA is located within the Ozark Mountains, a deeply dissected plateau within the U.S. Interior Highlands, the largest mountainous region between the Appalachians and the Rocky Mountains. Although the topography varies widely within the region, the Ozark geology is present throughout. Roughly at Fayetteville, the geology splits between the Boston Mountains to the south and the Springfield Plateau to the north. The Ouachita orogeny exposed the older limestones of the Springfield Plateau, resulting in a softer terrain, while the Boston Mountains retained steep, sharp grade changes. The Ozarks are covered by an oak-hickory-pine forest, with large portions of protected forestland remaining NWA. Approximately 25% of this forest has been cleared for development and agricultural uses. 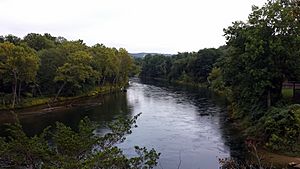 Within NWA, the White River is impounded at several locations, the most important of which is at Beaver Dam, forming the 13,700 acres (5,500 ha) Beaver Lake. This reservoir was created in the 1960s for flood control, recreational, and energy production uses. It also serves as the water supply for most of NWA, with Beaver Water District treating potable water and selling it directly to the four largest NWA municipalities.

The Illinois River watershed is a sensitive watershed that has been the subject of controversy within the area for many years. The phosphorus load of the Illinois has been subject of controversy, eventually resulting in litigation between Oklahoma and Arkansas reaching the United States Supreme Court in 1992. The Environmental Protection Agency (EPA) has classified the Illinois as Section 303(d) of the Clean Water Act, listing it as an "impaired and threatened water" due to the high phosphorus loads.

The Northwest Arkansas region is widely known for its natural beauty, and outdoor recreation. A local outdoor favorite is Devil's Den State Park, located outside of Fayetteville in West Fork, Arkansas. The park offers scenic camping, climbing, fishing, caves, trails, and hiking through the Ozark Mountains. The park is located just off Highway 74.

The most popular water destination is Beaver Lake. Beaver Lake has some 487 miles (784 km) of natural shoreline. With towering limestone bluffs, natural caves, and a wide variety of trees and flowering shrubs, it is a popular tourist destination. Paved access roads wind through twelve developed parks. These parks have modern campsites offering electricity and fire rings with drinking water, showers, and restrooms nearby. Other facilities, such as picnic sites, swimming beaches, hiking trails, boat launching ramps, and sanitary dump stations are also available in the parks.

The Botanical Garden of the Ozarks, which covers 86 acres (350,000 m2), is a new botanical garden now taking shape near Fayetteville. The site is located at the Fayetteville-Springdale border on Crossover Road (Highway 265) and currently includes seasonal plantings in a small area, a wildflower meadow, a lakeside hiking trail, and a self-guided tree identification tour. The garden's history dates to 1993 with a 2001 master plan. Construction will be undertaken in three phases. Phase 1 will build the garden gateway and entry road, parking area, visitor center, cafe and dining terrace, exhibit gallery, conference room, and 1/3 of the core gardens with 1/2 of the horticulture and maintenance facilities. Phase 2 will create additional gardens, offices, classrooms, boat rental facility, amphitheater, observatory, demonstration gardens, and the remaining core gardens. Phase 3 will add trails, tropical conservatory, and lakeside overlooks, with the western 50 acres (200,000 m2) dedicated to native woodland plant restoration and wayside interpretive stations.

The Crystal Bridges Museum of American Art in Bentonville was recently completed. The museum, funded by Sam Walton's daughter, Alice Walton, and designed by world-renowned architect Moshe Safdie, is home to some of America's finest works of art and has immediately become one of the nation's premier art museums.

The Walton Arts Center is Arkansas' largest performing arts center. It is located in Fayetteville near the campus of the University of Arkansas and serves as a cultural center for the Northwest Arkansas area. The building was opened in 1992 in large part because of funds donated by the Walton family (of Wal-Mart). The center is host to many musicals, plays, and other artistic and educational events throughout the year. The Walton Arts Center is also home to the Symphony of Northwest Arkansas, currently under the direction of Paul Haas.

TheatreSquared is Northwest Arkansas's regional professional theatre. Its four-play season and annual Arkansas New Play Fest are attended by an audience of 22,000, including educational outreach program to approximately 10,000 students and their teachers. The company was recognized by the American Theatre Wing in 2011 as one of the nation's ten most promising emerging theatres.

The Arts Center of the Ozarks is the region's oldest community theatre. Since its inception in 1967, the ACO has grown from a small arts organization into a cultural center of regional significance. Located in downtown Springdale, the ACO offers a full season of mainstage plays and musicals, children's programs, visual arts exhibits, and classes in a variety of creative outlets.

Visitors to the area might also stop by the Wal-Mart Visitor Center. Located in Sam Walton's original Bentonville variety store, the Wal-Mart Visitors Center traces the origin and growth of Wal-Mart. The center was created as an educational and informative facility for those interested in this American retailing success story.

Anyone looking for a night on the town should head to the famous Dickson Street in downtown Fayetteville, just off the University of Arkansas campus. Lined with popular bars, restaurants, and shops, Dickson Street is always lively, especially after large sporting events. Dickson Street is home to the Walton Arts Center, the Bikes, Blues, and BBQ Festival, and many parades.

View of Razorback Stadium during a visit from ESPN's College Gameday

The sporting scene is large in Northwest Arkansas, primarily due to the presence of the University of Arkansas Razorbacks, Arkansas’ most successful, followed, and loved sports teams. The Razorbacks have a huge economic impact on the area, drawing fans from every corner of the state during football, basketball, and baseball seasons.

The Razorbacks currently field 19 total men's and women's varsity teams (8 men's and 11 women's) in 13 sports. The men's varsity teams are baseball, basketball, cross country, football, golf, tennis, and indoor and outdoor track and field; the 11 women's varsity teams are basketball, cross country, golf, gymnastics, soccer, swimming and diving, indoor and outdoor track, tennis, softball and volleyball. The Razorbacks compete in the NCAA's Division I (Division I FBS in football) and are currently members of the Southeastern Conference (Western Division).

In early 2008, Northwest Arkansas welcomed a Double-A minor league baseball team, formerly known as the Wichita Wranglers, to Springdale, where they became the Northwest Arkansas Naturals. The Naturals play at the newly completed Arvest Ballpark.

The region is served almost solely by the undersized Interstate 49. I-49 has been the cause of much frustration in the area due to frequent traffic jams and accidents caused by the sudden growth of the area. Expansion of the interstate and its interchanges are currently in the planning and building stages. [1] Other major highways that serve the area include US 62, US 71, US 71B, and US 412.

Air traffic in the area relies on the Northwest Arkansas Regional Airport for all commercial passengers. The airport provides nonstop service to thirteen US cities. The airport has seen a consistent rise in usage, with over 50,000 passenger emplanements per month.[2]

Two public transit agencies serve the area; Ozark Regional Transit is a general transit agency with around a dozen local routes, plus commuter, paratransit, and special purpose routes. Razorback Transit primarily serves University of Arkansas students, is fare-free, and has a service area limited to Fayetteville. It is also open to the general public.

All content from Kiddle encyclopedia articles (including the article images and facts) can be freely used under Attribution-ShareAlike license, unless stated otherwise. Cite this article:
Northwest Arkansas Facts for Kids. Kiddle Encyclopedia.