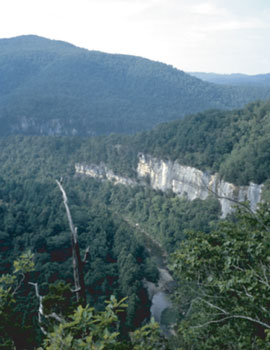 The Boston Mountains area is a high and deeply dissected plateau. They are located in northern Arkansas and eastern Oklahoma. The Oklahoma portion of the range is locally called the Cookson Hills. The rocks of the region are sedimentary layers of the Paleozoic age. The highest ridges and peaks are capped by Pennsylvanian sandstone and shale. The deeply eroded valleys are cut into Mississippian limestones and below that layer Ordovician dolomites.

The Boston Mountains form the southwestern part of the Ozark plateau. They are the highest and most rugged part of the Ozarks. This is because of their young age relative to the other sections. The highest point is 2,578 feet. It has valleys 500 to 1,550 feet deep. Turner Ward Knob (TWK) is the highest named peak. It is in western Newton County, Arkansas and rises to 2,463 feet (751 m).

All content from Kiddle encyclopedia articles (including the article images and facts) can be freely used under Attribution-ShareAlike license, unless stated otherwise. Cite this article:
Boston Mountains Facts for Kids. Kiddle Encyclopedia.