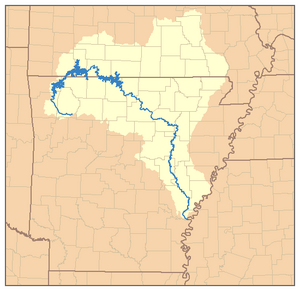 Map of the White River in Arkansas and Missouri

The White River is a 722-mile (1,162-km) long river that flows through the U.S. states of Arkansas and Missouri.

The source of the White River is in the Boston Mountains of northwest Arkansas, in the Ozark–St. Francis National Forest southeast of Fayetteville. The river flows northwards from its source in northwest Arkansas. It loops up through southwest Missouri into Table Rock Lake at Branson, Missouri. In Branson the river enters Lake Taneycomo, controlled by the Powersite Dam. The Powersite was the first dam on the White River. The flow continues downstream into Bull Shoals Lake. From there it travels back into Arkansas, and then heads generally southeast to where it flows into the Mississippi River. Despite being much shorter than the Arkansas River, it carries nearly as much water—normally more than 20,000 cubic feet per second (570 m3/s), and occasionally more than 100,000 cubic feet per second (2,800 m3/s) during floods.

Lake Taneycomo was created in 1913 when the Empire District Electric Company built a dam just south of Forsyth, Missouri. Beaver Lake, Table Rock Lake, and Bull Shoals Lake are man-made lakes or reservoirs created by the U.S. Army Corps of Engineers. This was under the authority of the Flood Control Act of 1938. A total of eight dams restrict the upper White River. Six are in Arkansas and two in Missouri. The White River National Wildlife Refuge lies along the lower part of the river. None of the original White River remains in Missouri. It has been replaced by a series of dams that flooded it's valleys. The White River was once known as one of the best Smallmouth bass fisheries in the world. Smallmouth still inhabit the impoundments but trout have replaced the smallmouth in much of the river, as the dams release much colder water.

The tributaries of the White River include Cache River, Bayou des Arc, Little Red River, Black River, North Fork River, Buffalo River, Kings River, James River, and Roaring River. Some cities that lie on the White River are Newport, Augusta, Calico Rock, and Batesville, all in Arkansas, as well as Branson and Hollister in Missouri.

Fishing for trout is popular in the upper portions of the river. This ranges from the Beaver Lake tailwaters in northwestern Arkansas, through its course through southwest Missouri(including all of Lake Taneycomo), and back down through Arkansas. This is to the Highway 58 bridge in Guion. The river has long been ranked one of the top trout fisheries in the United States. Fishing is popular in these waters for a number of trout species including rainbow, brown, and cutthroat trout. A number of trout fishing resorts lie on the tailwaters of Bull Shoals Lake and the North Fork River. Fishing for white bass is also popular in these waters.

All content from Kiddle encyclopedia articles (including the article images and facts) can be freely used under Attribution-ShareAlike license, unless stated otherwise. Cite this article:
White River (Arkansas) Facts for Kids. Kiddle Encyclopedia.