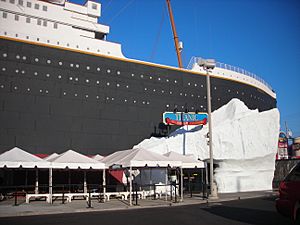 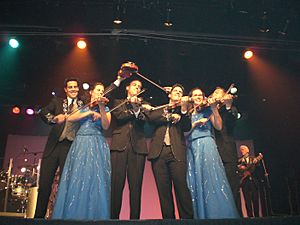 The Duttons performing in Branson. 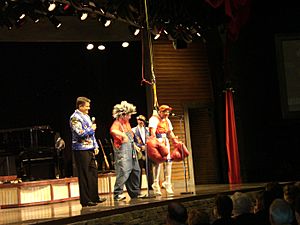 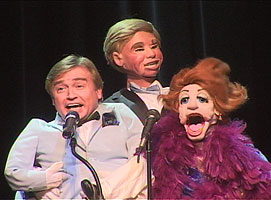 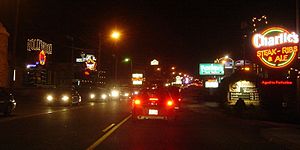 Branson is a city in Stone and Taney counties in the U.S. state of Missouri. Most of the city is in Taney County, with a small portion in the west extending into Stone County. Branson is in the Ozark Mountains. The community was named after Ruben Branson, postmaster and operator of a general store in the area in the 1880s. The population was 10,520 at the 2010 census.

Branson has long been a popular destination for vacationers from Missouri and neighboring areas. The collection of entertainment theaters along 76 Country Boulevard (and to a lesser extent along Shepherd of the Hills Expressway), including Dolly Parton's Dixie Stampede, has increased Branson's popularity as a tourist destination. Branson now draws visitors from all regions of the country, mostly by car or bus.

In 1882, Reuben Branson opened a general store and post office in the area. Branson was formally incorporated in 1912, and construction of the Powersite Dam nearby on the White River which would form Lake Taneycomo was completed.

In 1894, William Henry Lynch bought Marble Cave (renamed "Marvel Cave") and began charging visitors to tour it. Hugo and Mary Herschend leased the cave for 99 years in 1950 and began hosting square dances in it. The Herschend Family modernized the cave with electricity and concrete staircases, and in 1960 the Herschends opened Silver Dollar City, a re-creation of a frontier town that featured five shops, a church, and a log cabin, with actors that played out the feud between the Hatfields and the McCoys.

Harold Bell Wright published his novel about the Ozarks, The Shepherd of the Hills, in 1907. The Old Mill Theater began its first outdoor production based on the novel in 1960. The show known as The Shepherd of the Hills Outdoor Drama & Homestead continues in its 56th season for 2015. It is also the home of Inspiration Tower, the Sons of the Pioneers show, and other attractions. The Harold Bell Wright Museum is located within The World's Largest Toy Museum complex. Mayor of Branson for 12 years and entrepreneur Jim Owen built the first theater in 1934 on Commercial Street, originally called "The Hillbilly Theater", which began to attract people from far and wide to tour the area. 1959 saw the completion of Table Rock Dam on the White River, which created Table Rock Lake. In 1959, the Baldknobbers Jamboree opened the first live music show in Branson.

In 1962, Paul Henning, inspired by a Boy Scout camping trip to the Ozarks, created The Beverly Hillbillies, which ran on first-run television until 1971. The first five episodes of Season 8 in 1969 are set in the Branson area when the Clampetts return to their home. Henning later donated 1,534 acres (6.21 km2) for the Ruth and Paul Henning Conservation Area near Branson. He also donated the modified 1921 Oldsmobile truck used as the vehicle in the series to the College of the Ozarks, where it is on display in the Ralph Foster Museum.

The Presley family (no relation to Elvis Presley but related to former Branson mayor Raeanne Presley by marriage) became the first to move their show (Presleys' Country Jubilee) to Highway 76 in 1967, followed a year later by the Baldknobbers. Eventually Branson would have more than 50 theaters, most of them located on Highway 76.

In the early 1980s, Chisai Child's Starlite Theater (not to be confused with the current theater by the same name) was one of the first to introduce stage sets, horn section, elaborate costume changes, and music outside of the traditional country music normally played. It helped to launch the careers of Shoji Tabuchi and many others.

In 1983, Branson began its transformation into a major tourist attraction when the Roy Clark Celebrity Theatre opened and began to bring famous country music stars to Branson. Many of the performers who have had their own theaters in Branson first discovered Branson when they performed at this venue. The Roy Clark Celebrity Theatre at the Lodge of the Ozarks has been called the "birthplace of Branson celebrity theatres".

Also in 1983, the 7,500-seat Swiss Villa Amphitheatre opened in Lampe, southwest of Branson. The outdoor amphitheatre brought in acts like Def Leppard, Lynyrd Skynyrd, REO Speedwagon, Steppenwolf, and Ozzy Osbourne. Closing in the early 2000s, it reopened in 2010 as the Black Oak Mountain Amphitheatre.

In 1987, Boxcar Willie became the first internationally known entertainer to purchase a theater in Branson and have a permanent performance schedule there.

In 1989, Shoji Tabuchi opened his first theater in Branson (converting the Ozarks Auto Museum on West 76 Highway into a theater). He then built a new theater on Shepherd of the Hills Expressway in 1990, while Mel Tillis moved into Shoji's old theater. In 1990-1991 several nationally known stars such as Jim Stafford, Ray Stevens, Mickey Gilley, and Moe Bandy opened their own theaters. Along with these national stars, many home-grown shows also had theaters. The Lowe Family featured their show and hosted nationally known stars like Conway Twitty, Loretta Lynn, Vern Gosdin, Waylon Jennings, and others. 76 Music Hall (now known as the Grand Country Music Hall) became the first theater to have three different shows a day performing in different time slots. Buck Trent became the first nationally known star to open a morning show.

The increasing number of theaters and other attractions opening in Branson drew the attention of 60 Minutes, which aired an episode about Branson on December 8, 1991, and called it the "live music capital of the entire universe".

Andy Williams built his theater in Branson, opening on May 1, 1992, calling it the Moon River Theatre. The Glen Campbell Goodtime Theatre opened in 1994, starring Glen along with his "Goodtime Band", daughter Debbie Campbell, the Matthew Dickens Dancers, and comedian ventriloquist Jim Barber. Also headlining their own theaters were Tony Orlando (Yellow Ribbon Theater) and Bobby Vinton (Blue Velvet Theater). In 1998, the Acrobats of China arrived in Branson, making them one of the first international shows to call Branson home. They opened their theatre, the New Shanghai Theatre, in 2005. In 2006, Dick Clark's American Bandstand Theatre opened and is the most recent new theater to be built on Route 76. Branson has continued to add theaters (the most recent being the Sight & Sound Theatres) and shows; it refers to itself as "the live music show capital of the world".

Scenes from the family motion picture Gordy were shot here in 1995.

The closest commercial airport is the newly developed Branson Airport which opened in May 2009, constructed on a budget of $155 million on land formerly owned by Tennessee Ernie Ford. This airport is privately owned, and it is thought to be the largest privately owned commercial airport in the United States. Its construction involved flattening the tops of a series of Ozark Mountains and is thought to be the largest earth moving project in the history of the state. Previously, the closest commercial airport was Springfield–Branson National Airport 50 miles (80 km) northwest of Branson, owned by the city of Springfield.

Just after 1 a.m. on February 29, 2012, the city of Branson sustained damage from an EF-2 tornado in the 2012 Leap Day tornado outbreak. At least 37 injuries were reported, most being cuts and bruises. Most of the tourist attractions and businesses were undamaged and remained open after the storm, although at least 11 buildings suffered more than $3 million in total damage. As of November 2012, most of the damage was repaired. Mary Jane Rice, a spokeswoman for Branson Area Chamber of Commerce, told the AP that February is generally a slow time for business and most of the damage would be cleaned up in the next few days. The tornado followed a 22 mile long path from Kimberling City, Missouri across Table Rock Lake and along the entertainment strip Missouri Route 76 before hitting the downtown area where it blew out or cracked windows in 219 of the hotel rooms in the 12-story/295 room Hilton Branson Convention Center. The tornado extensively damaged three of Branson’s 50-plus theatres — (Americana Theater, Branson Variety Theater and Dick Clark's American Bandstand Theater) and there was damage to portions of Branson Landing on Lake Taneycomo and the Veterans Memorial Museum. Vehicles at the Ride the Ducks water/land attraction were flipped over, but officials said they were not damaged enough to be put out of service

Besides the numerous entertainment theaters for which Branson is famous, other local attractions include Hollywood Wax Museum Branson, Silver Dollar City, White Water, Waltzing Waters, Mount Pleasant Winery, Stone Hill Winery, Ride the Ducks, Dolly Parton's Dixie Stampede, Ziplines, Cave Tours, National Tiger Sanctuary, Go-Karts, Mini Golf, Horseback Rides, Butterfly Palace, and Rainforest Adventure. Ripley's Odditorium is housed in a building that has been made to look as if it is cracked wide open by an earthquake or other disaster, while the Titanic Museum is a half-scale replica of the famous ship and iceberg.

Branson Landing opened in the summer of 2006 on the Lake Taneycomo waterfront in downtown Branson. The lakefront project includes retail space with Bass Pro Shops and Belk as anchors in an outdoor shopping mall of stores and restaurants. It also features a scenic boardwalk along the lakefront with the Branson Landing Fountains at the heart of the property as well as a Hilton Hotel. Branson Landing has been known to host summer concerts and other special events throughout the year. The new convention center, situated between the Landing and downtown, opened September 7, 2007. The Branson Scenic Railway is located in the old depot, across from Branson Landing.

Branson has a humid subtropical climate, with characteristics of a continental climate.

There were 4,688 households of which 23.2% had children under the age of 18 living with them, 42.8% were married couples living together, 10.7% had a female householder with no husband present, 3.9% had a male householder with no wife present, and 42.5% were non-families. 32.8% of all households were made up of individuals and 13.5% had someone living alone who was 65 years of age or older. The average household size was 2.20 and the average family size was 2.77.

There were 2,701 households out of which 24.3% had children under the age of 18 living with them, 48.9% were married couples living together, 9.4% had a female householder with no husband present, and 38.5% were non-families. 31.9% of all households were made up of individuals and 14.1% had someone living alone who was 65 years of age or older. The average household size was 2.21 and the average family size was 2.76.

U.S. Route 65 runs north and south connecting Branson to Springfield to the north, and Little Rock to the south.

The NTSB is investigating an incident involving Southwest Airlines Flight # 4013 that landed at the wrong airport in Hollister, MO, just after 6 PM on Sunday Jan 12, 2014. The Boeing 737 flight from Chicago touched down at the College of the Ozarks, M. Graham Clark Downtown Airport (KPLK), Point Lookout, Missouri.

All content from Kiddle encyclopedia articles (including the article images and facts) can be freely used under Attribution-ShareAlike license, unless stated otherwise. Cite this article:
Branson, Missouri Facts for Kids. Kiddle Encyclopedia.