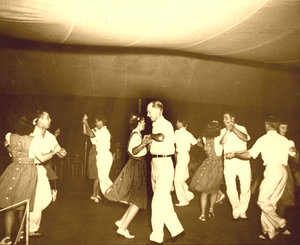 Square dances are sequence dance for four couples in a square. Each couple faces the centre of the square.

Square dances were first written about in 16th-century England, and were also common in France and throughout Europe. They came to North America with the European settlers. Square dances are a type of folk dance.

All content from Kiddle encyclopedia articles (including the article images and facts) can be freely used under Attribution-ShareAlike license, unless stated otherwise. Cite this article:
Square dance Facts for Kids. Kiddle Encyclopedia.