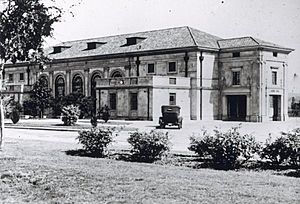 The Albert Hall photographed by WJ Mildenhall about 1928 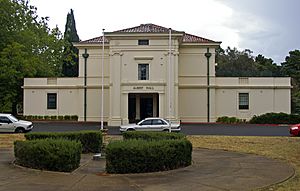 Front view of the Albert Hall 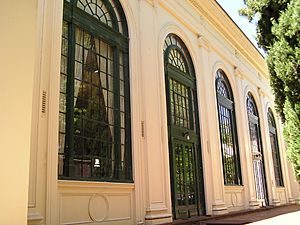 Windows on the south face of the building 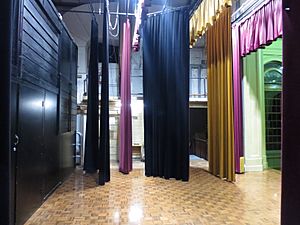 The Albert Hall is a hall in Canberra, Australia, used for entertainment. It is on Commonwealth Avenue between Commonwealth Bridge and the Hotel Canberra in the suburb of Yarralumla.

The hall was opened on 10 March 1928 by the Prime Minister, Stanley Bruce. Bruce named the hall, explaining at the opening ceremony that he had chosen the name from the Royal Albert Hall in London and also because it was the first name of The Duke of York (later George VI) and furthermore that it commemorated the "Consort of the Queen who had proclaimed the Australian Commonwealth".

The hall was originally designed by the Federal Capital Commission architect David Limburg, under Chief Architect Henry Rolland, then amended before construction. It is in the Federal Classical style. A porte-cochere at the front allows for passengers from vehicles to alight undercover.

The Hall comfortably seats around 400 people in open-spaced rows of seats.

Albert Hall’s east end has a Foyer with three sets of doors from the porte-cochere and a further three sets leading to the Hall. On the south side is the original ticket booth and toilets for men and women. On the northern side is a small entertaining room with kitchen and servery; the main Hall’s chairs are stacked here when not in use. The floor above has on the east side a small suite of offices for meetings, and on the side facing into the Hall is a mezzanine with raked fixed seating for about 50 people, accessed by stairs from the Foyer. Over the small entertaining room is a flat roofed outdoor area that may be used for entertaining by users of the offices.

Behind the stage on the west end are two suites of preparation rooms for performers, one on either side. There is no interconnection, or passage around the stage area.

The hall was not heated in its early years, and patrons had to bring rugs, thick coats and water bottles. Singers were known to perform in fur coats until heating was finally installed after World War II.

On 27 January 1949, the Albert Hall hosted the inaugural meeting of the Canberra branch of the Liberal Party of Australia.

Prior to its construction, the largest hall in the Federal Capital Territory was at the Causeway in Kingston. Until the completion of the Canberra Theatre in 1965, the Albert Hall was the only place in Canberra for audiences of more than 700 people other than the cinemas.

The Albert Hall remains the 'city hall' for Australia's national capital, used for civic, cultural and community functions and with some commercial use. It is heavily booked on weekends and during the week for private events, dances, balls, performances, cultural activities and commercial sales.

All content from Kiddle encyclopedia articles (including the article images and facts) can be freely used under Attribution-ShareAlike license, unless stated otherwise. Cite this article:
Albert Hall, Canberra Facts for Kids. Kiddle Encyclopedia.