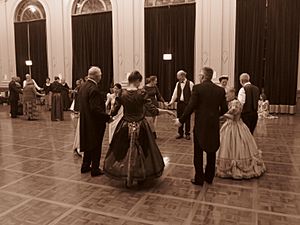 Sequence dancing is a form of dance in which there is a preset pattern of movements, to music. The music is usually also preset. Sequence dancing may include dances of many different styles. The term may include ballroom dances, which move round the floor, as well as line, square and circle dances.

Sequence dancing in general is much older than modern ballroom dances. With the exception of the waltz, invented around 1800, all dances in ballrooms were sequence dances until the early 20th century. The quadrille was one example, the minuet another.

The British Sequence Championships is the most famous annual sequence dance competition and is part of the Blackpool Sequence Dance Festival. This is held in the Empress Ballroom, Winter Gardens, Blackpool, England, since 1949.

All content from Kiddle encyclopedia articles (including the article images and facts) can be freely used under Attribution-ShareAlike license, unless stated otherwise. Cite this article:
Sequence dance Facts for Kids. Kiddle Encyclopedia.