Schleswig-Holstein borders on Denmark in the North, the North Sea in the West, the Baltic Sea and Mecklenburg-Western Pomerania in the East, and Lower Saxony and Hamburg in the South. Kiel is the capital of this state.

There are 4 independent towns: 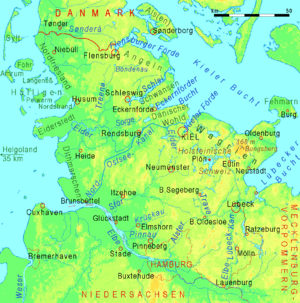 Schleswig-Holstein lies on the base of Jutland Peninsula between the North Sea and the Baltic Sea. Strictly speaking, "Schleswig" refers to the German Southern Schleswig (German: Südschleswig or Landesteil Schleswig, Danish: Sydslesvig), whereas Northern Schleswig is in Denmark (South Jutland County, Region of Southern Denmark). The state of Schleswig-Holstein further consists of Holstein, as well as Lauenburg and the formerly independent city of Lübeck.

Schleswig-Holstein borders Denmark (Southern Denmark) to the north, the North Sea to the west, the Baltic Sea to the east, and the German states of Lower Saxony, Hamburg, and Mecklenburg-Vorpommern to the south.

In the western part of the state, the lowlands have virtually no hills. The North Frisian Islands, as well as almost all of Schleswig-Holstein's North Sea coast, form the Schleswig-Holstein Wadden Sea National Park (Nationalpark Schleswig-Holsteinisches Wattenmeer) which is the largest national park in Central Europe. Germany's only high-sea island, Heligoland, is situated in the North Sea.

The Baltic Sea coast in the east of Schleswig-Holstein is marked by bays, fjords, and cliff lines. Rolling hills (the highest elevation is the Bungsberg at 168 metres or 551 feet) and many lakes are found, especially in the eastern part of Holstein called the Holstein Switzerland and the former Duchy of Lauenburg (Herzogtum Lauenburg). Fehmarn is the only island off the eastern coast. The longest river besides the Elbe is the Eider; the most important waterway is the Kiel Canal which connects the North Sea and Baltic Sea. 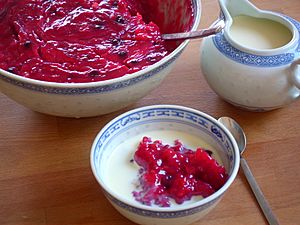 Shared with neighboring Denmark: Rødgrød served in Schleswig-Holstein with milk or custard

Schleswig-Holstein combines Danish and German aspects of culture. The castles and manors in the countryside are the best example for this tradition; some dishes like Rødgrød (German: Rote Grütze, literal English "red grits" or "red groats") are also shared, as well as surnames such as Hansen.

The most important festivals are the Kiel Week, Schleswig-Holstein Musik Festival, an annual classic music festival all over the state, and the Lübeck Nordic Film Days, an annual film festival for movies from Scandinavian countries, held in Lübeck.

The annual Wacken Open Air festival is considered to be the largest heavy metal rock festival in the world.

The state's most important museum of cultural history is in Gottorf Castle in Schleswig.

The Wagnerian tenor Klaus Florian Vogt is from Schleswig - Holstein.

All content from Kiddle encyclopedia articles (including the article images and facts) can be freely used under Attribution-ShareAlike license, unless stated otherwise. Cite this article:
Schleswig-Holstein Facts for Kids. Kiddle Encyclopedia.