Rendsburg (Danish: Rendsborg) is a town on the River Eider and the Kiel Canal in the central part of Schleswig-Holstein, Germany. It is the capital of the Kreis (district) of Rendsburg-Eckernförde. As of 2006[update], it had a population of 28,476. 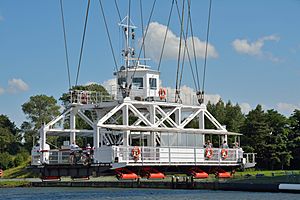 Rendsburg's foundation date is unknown. Rendsburg was first mentioned in 1199. An old form of its name in Danish was Reynoldsburgh.

It became a part of Holstein in the 13th century, but was transferred to Schleswig in 1460. Many times the town passed from Danish to German control and vice versa. In the German-Danish War in 1864 Rendsburg was finally seized by Kingdom of Prussia and Austria. After 1866 the town was annexed by the Kingdom of Prussia. Since that time it has remained part of Germany.

Although the Eider is navigable for small craft from its mouth on the North Sea to Rendsburg, the town's importance rose in 1895, when the Kiel Canal was finished. The much larger ships that could navigate the Kiel Canal meant that, although situated inland, Rendsburg became a seaport and a dockyard.

The most prominent structure in town, the Rendsburg High Bridge, a railway bridge made of steel, 2,500 metres (8,200 ft) in length and 41 metres (135 ft) in height, was constructed in 1913 to take the Neumünster–Flensburg railway over the Kiel Canal from the relatively flat land on either side. It is the longest railway bridge in Europe (highway/rail bridge Øresund Bridge is longer): on the northern side, the bridge connects to the Rendsburg Loop to gain height and to allow trains to continue to serve the Rendsburg station. Suspended from the railway bridge, a transporter bridge - one of only twenty ever built - traverses the canal.

The German Army's Air Defence School and the Bundesamt für Strahlenschutz are both located in Rendsburg.

All content from Kiddle encyclopedia articles (including the article images and facts) can be freely used under Attribution-ShareAlike license, unless stated otherwise. Cite this article:
Rendsburg Facts for Kids. Kiddle Encyclopedia.