The Kiel Canal, literally "North-[to]-Baltic Sea canal", formerly known as the Kaiser-Wilhelm-Kanal, is a 95-kilometre (59 mi) long freshwater canal in the German state of Schleswig-Holstein.

The canal was first opened to traffic on 19 June 1895. It was then improved to allow the largest warships to pass through. The formal reopening of the improved canal was on June 24, 1914. The Kiel Canal is the busiest artificial waterway for seagoing ships worldwide. In 2014, 32,600 ships passed through the waterway.

An average of 250 nautical miles (460 km) is saved by using the Kiel Canal instead of going around the Jutland Peninsula. This not only saves time but also avoids storm-prone seas and having to pass through the Sound or Belts.

Besides its two sea entrances, the Kiel Canal is linked, at Oldenbüttel, to the navigable River Eider by the short Gieselau Canal. 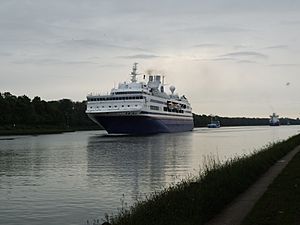 There are detailed traffic rules for the canal. Each vessel in passage is classified in one of six traffic groups according to its dimensions. Larger ships are obliged to accept pilots and specialised canal helmsmen, in some cases even the assistance of a tugboat.

Furthermore, there are regulations regarding the passing of oncoming ships. Larger ships may also be required to moor at the bollards provided at intervals along the canal to allow the passage of oncoming vessels. Special rules apply to pleasure craft.

All permanent, fixed bridges crossing the canal since its construction have a clearance of 42 metres (138 ft).

Local traffic is also catered for by 14 ferry lines. Most noteworthy is the “hanging ferry” beneath the Rendsburg High Bridge. All ferries are run by the Canal Authority and their use is free of charge.

All content from Kiddle encyclopedia articles (including the article images and facts) can be freely used under Attribution-ShareAlike license, unless stated otherwise. Cite this article:
Kiel Canal Facts for Kids. Kiddle Encyclopedia.