Kiel is the capital and most populous city in the northern German state of Schleswig-Holstein, with a population of 249,023 (2016).Kiel lies approximately 90 kilometres (56 mi) north of Hamburg.

Due to its geographic location in the north of Germany, the southeast of the Jutland peninsula and the southwestern shore of the Baltic Sea, Kiel has become one of the major maritime centres of Germany. For instance, the city is known for a variety of international sailing events, including the annual Kiel Week, which is the biggest sailing event in the world. The Olympic sailing competitions of the 1936 and the 1972 Summer Olympics were held in the Bay of Kiel.

Kiel has also been one of the traditional homes of the German Navy's Baltic fleet, and continues to be a major high-tech shipbuilding centre. Located in Kiel is the GEOMAR - Helmholtz Centre for Ocean Research Kiel at the University of Kiel. 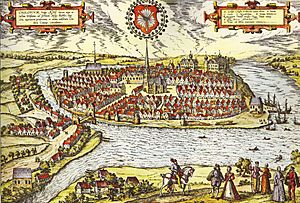 Kiel in the 16th century

Kiel is an important sea transport hub, thanks to its location on the Kiel Fjord and the busiest artificial waterway in the world, Kiel Canal. A number of passenger ferries to Sweden, Norway, Lithuania and other countries operate from here. Moreover, today Kiel Harbour is an important port of call for cruise ships touring the Baltic Sea.

Kiel's recorded history began in the 13th century, but the city was originally a Danish village, in the 8th century. Until 1864 it was administered by Denmark in personal union. In 1866 the city was annexed by Prussia and in 1871 it became part of Germany.

Today, Kiel is an important maritime centre of Germany, with high-tech shipbuilding, submarine construction and one of the three leading institutions in the field of marine sciences in Europe. Kiel is also home to a large service sector and a number of research institutions including the University of Kiel, which is the oldest, largest, and most prestigious university in the state.

All content from Kiddle encyclopedia articles (including the article images and facts) can be freely used under Attribution-ShareAlike license, unless stated otherwise. Cite this article:
Kiel Facts for Kids. Kiddle Encyclopedia.