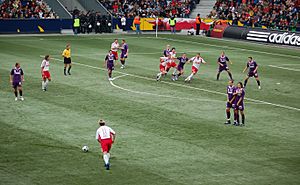 Scene from a Bundesliga game in Austria 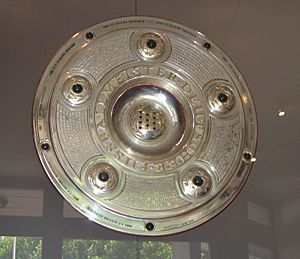 Award for the German Champion in Football

Bundesliga is the name of the highest level of play in many different sports. Bundesliga literally means "Federal League", or league of the whole country. The word is used in the countries Germany and in Austria. Football is the most popular sport in these countries. That is why Germany's football league is the best-known Bundesliga.

Teams come into the Bundesliga by having 1st place in one of the lower leagues. The team leading at the end of the season is called Meister, the German word for champion. Season is the time of the year where games are played. As a rule, a season begins in the second half of one year and ends in the first half of the next year.

The leading team is found through the number of points gained during the season. The season is split into two parts. In each part, each team plays against each other team. In football, the winning team gets three points. If a game ends without a winner, both teams get one point. Bayern Munich has won the Bundesliga 23 times. In the years of 2000 until 2010, they won seven times.

All content from Kiddle encyclopedia articles (including the article images and facts) can be freely used under Attribution-ShareAlike license, unless stated otherwise. Cite this article:
Bundesliga Facts for Kids. Kiddle Encyclopedia.