The stadium from above. 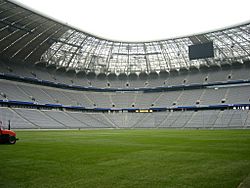 Allianz Area from the inside.

The Allianz Arena (During the World Cup 2006 in Germany the stadium was called FIFA WM-stadium Munich) is a football stadium in the north of Munich, Germany. Bayern Munich, TSV 1860 München and the Germany national football team use this stadium. The stadium offers 69,901 seats.

The stadium was used for the 2012 UEFA Champions League Final.

The stadium took about 340 million Euros to make. The stadium was made with real grass. The architect was Herzog & de Meuron and ArupSport.

The stadium was used for 6 games in the 2006 FIFA World Cup.

Inside Allianz Arena during a match between FC Bayern Munich and TSV 1860 München, 10 June 2005.

All content from Kiddle encyclopedia articles (including the article images and facts) can be freely used under Attribution-ShareAlike license, unless stated otherwise. Cite this article:
Allianz Arena Facts for Kids. Kiddle Encyclopedia.