Chelsea Football Club is an English professional football club based in Fulham, London. Founded in 1905, the club competes in the Premier League, the top division of English football. Chelsea are among England's most successful clubs, having won over thirty competitive honours, including six league titles and six European trophies. Their home ground is Stamford Bridge.

Chelsea won their first major honour, the League championship, in 1955. The club won the FA Cup for the first time in 1970 and their first European honour, the Cup Winners' Cup, in 1971. After a period of decline in the late 1970s and 1980s, the club enjoyed a revival in the 1990s and had more success in cup competitions. The past two decades have been the most successful in Chelsea's history: they won five Premier League titles and both the UEFA Champions League and UEFA Europa League during this period. Chelsea are one of five clubs to have won all three of UEFA's main club competitions, the first English club to achieve the UEFA treble, and the only London club to have won the Champions League.

Chelsea's home kit colours are royal blue shirts and shorts with white socks. The club's crest features a ceremonial lion rampant regardant holding a staff. The club has rivalries with neighbouring teams Arsenal and Tottenham Hotspur, and a historic rivalry with Leeds United. Based on attendance figures, the club has the sixth-largest fanbase in England. In terms of club value, Chelsea are the sixth most valuable football club in the world, worth £2.13 billion ($2.576 billion), and are the eighth highest-earning football club in the world, with earnings of over €428 million in the 2017–18 season. Since 2003, Chelsea have been owned by Russian billionaire Roman Abramovich. 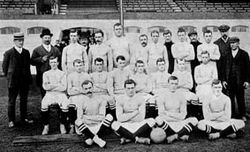 The first Chelsea team in September 1905

In 1904, Gus Mears acquired the Stamford Bridge athletics stadium with the aim of turning it into a football ground. An offer to lease it to nearby Fulham was turned down, so Mears opted to found his own club to use the stadium. As there was already a team named Fulham in the borough, the name of the adjacent borough of Chelsea was chosen for the new club; names like Kensington FC, Stamford Bridge FC and London FC were also considered. Chelsea were founded on 10 March 1905 at The Rising Sun pub (now The Butcher's Hook), opposite the present-day main entrance to the ground on Fulham Road, and were elected to the Football League shortly afterwards.

Chelsea won promotion to the First Division in their second season, and yo-yoed between the First and Second Divisions in their early years. They reached the 1915 FA Cup Final, where they lost to Sheffield United at Old Trafford, and finished third in the First Division in 1920, the club's best league campaign to that point. Chelsea had a reputation for signing star players and attracted large crowds. The club had the highest average attendance in English football in ten separate seasons including 1907–08, 1909–10, 1911–12, 1912–13, 1913–14 and 1919–20.

They were FA Cup semi-finalists in 1920 and 1932 and remained in the First Division throughout the 1930s, but success eluded the club in the inter-war years.

Former Arsenal and England centre-forward Ted Drake was appointed manager in 1952 and proceeded to modernise the club. He removed the club's Chelsea pensioner crest, improved the youth set-up and training regime, rebuilt the side with shrewd signings from the lower divisions and amateur leagues, and led Chelsea to their first major trophy success – the League championship – in 1954–55. The following season saw UEFA create the European Champions' Cup, but after objections from The Football League and the FA, Chelsea were persuaded to withdraw from the competition before it started. Chelsea failed to build on this success, and spent the remainder of the 1950s in mid-table. Drake was dismissed in 1961 and replaced by player-coach Tommy Docherty.

Docherty built a new team around the group of talented young players emerging from the club's youth set-up, and Chelsea challenged for honours throughout the 1960s, enduring several near-misses. They were on course for a treble of League, FA Cup and League Cup going into the final stages of the 1964–65 season, winning the League Cup but faltering late on in the other two. In three seasons the side were beaten in three major semi-finals and were FA Cup runners-up. Under Docherty's successor, Dave Sexton, Chelsea won the FA Cup in 1970, beating Leeds United 2–1 in a final replay. The following year, Chelsea took their first European honour, a UEFA Cup Winners' Cup triumph, with another replayed win, this time over Real Madrid in Athens.

The late 1970s through to the '80s was a turbulent period for Chelsea. An ambitious redevelopment of Stamford Bridge threatened the financial stability of the club, star players were sold and the team were relegated. Further problems were caused by a notorious hooligan element among the support, which was to plague the club throughout the decade. In 1982, Chelsea were, at the nadir of their fortunes, acquired by Ken Bates for the nominal sum of £1, although by now the Stamford Bridge freehold had been sold to property developers, meaning the club faced losing their home. On the pitch, the team had fared little better, coming close to relegation to the Third Division for the first time, but in 1983 manager John Neal put together an impressive new team for minimal outlay. Chelsea won the Second Division title in 1983–84 and established themselves in the top division with two top-six finishes, before being relegated again in 1988. The club bounced back immediately by winning the Second Division championship in 1988–89. 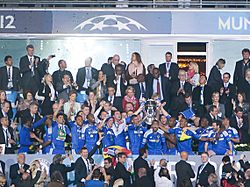 After a long-running legal battle, Bates reunited the stadium freehold with the club in 1992 by doing a deal with the banks of the property developers, who had been bankrupted by a market crash. Chelsea's form in the new Premier League was unconvincing, although they did reach the 1994 FA Cup Final. The appointment of Ruud Gullit as player-manager in 1996 began an upturn in the team's fortunes. He added several top international players to the side and led the club to their first major honour since 1971, the FA Cup. Gullit was replaced by Gianluca Vialli, whose reign saw Chelsea win the League Cup, the UEFA Cup Winners' Cup and the UEFA Super Cup in 1998, and the FA Cup in 2000. They also mounted a strong title challenge in 1998–99, finishing four points behind champions Manchester United, and made their first appearance in the UEFA Champions League. Vialli was sacked in favour of Claudio Ranieri, who guided Chelsea to the 2002 FA Cup Final and Champions League qualification in 2002–03.

In July 2003, Bates sold Chelsea to Russian billionaire Roman Abramovich for £140 million. Over £100 million was spent on new players, but Ranieri was unable to deliver any trophies, and was replaced by José Mourinho. Under Mourinho, Chelsea became the fifth English team to win back-to-back league championships since the Second World War (2004–05 and 2005–06), in addition to winning an FA Cup (2007) and two League Cups (2005 and 2007). After a poor start to the 2007–2008 season, Mourinho was replaced by Avram Grant, who led the club to their first UEFA Champions League final, which they lost on penalties to Manchester United.

In 2009, under caretaker manager Guus Hiddink, Chelsea won another FA Cup. In 2009–10, his successor Carlo Ancelotti led them to their first Premier League and FA Cup Double, also becoming the first English top-flight club to score 100 league goals in a season since 1963. In 2012, Roberto Di Matteo led Chelsea to their seventh FA Cup, and their first UEFA Champions League title, beating Bayern Munich 4–3 on penalties, the first London club to win the trophy. The following year the club won the UEFA Europa League, making them the first club to hold two major European titles simultaneously and one of five clubs to have won the three main UEFA trophies. Mourinho returned as manager in 2013 and led Chelsea to League Cup success in March 2015, and the Premier League title two months later. Mourinho was sacked after four months of the following season after a poor start. In 2017, under new coach Antonio Conte, Chelsea won their sixth English title and the following season won their eighth FA Cup. In 2018 Conte was sacked after a 5th-place finish and replaced with Maurizio Sarri, under whom Chelsea reached the League Cup final, which they lost on penalties to Manchester City and won the Europa League for a second time, beating Arsenal 4–1 in the final. Sarri then left the club to become manager of Juventus and was then replaced by former Chelsea player Frank Lampard. In Lampard's first season he guided Chelsea to 4th place in the Premier League and reached the FA Cup final, losing 2–1 to Arsenal. On 25 January 2021, Chelsea announced to have parted ways with the head coach Frank Lampard. He was replaced by former Paris Saint-Germain manager Thomas Tuchel. On 18 April 2021, Chelsea announced their part as a founding member of the Super League, a European-wide league competition compromising of the biggest European clubs.

All content from Kiddle encyclopedia articles (including the article images and facts) can be freely used under Attribution-ShareAlike license, unless stated otherwise. Cite this article:
Chelsea F.C. Facts for Kids. Kiddle Encyclopedia.