Wigan Athletic Football Club is an English football club from Wigan, Greater Manchester. The club plays in the Championship, currently managed by Owen Coyle. They play their home games at the DW Stadium. In 2012-13 they won the FA Cup by beating Manchester City 1-0 and so they played in the UEFA Europa League in the season 2013/14. A few days later they were relegated from the English Premier League to the Football League Championship, becoming the first FA Cup-winning side to be relegated in the same season. Manager Roberto Martínez left the club shortly after to join Everton. Owen Coyle replaced him. 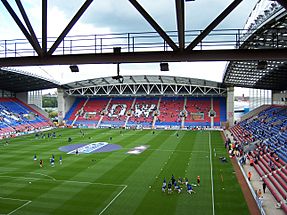 Warm-up at the DW Stadium.

Since Wigan Athletic's admission to the Football League in 1978, the club has built up several rivalries, mainly with Bolton Wanderers. They also have a rivalry with Manchester City, because they are from the same city and have the same blue club color.

Wigan's victory in the 2013 FA Cup Final qualified them for European football for the first time, earning them an automatic place in the group stage of the 2013–14 UEFA Europa League.

All content from Kiddle encyclopedia articles (including the article images and facts) can be freely used under Attribution-ShareAlike license, unless stated otherwise. Cite this article:
Wigan Athletic F.C. Facts for Kids. Kiddle Encyclopedia.