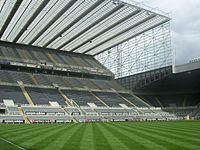 Newcastle United Football Club is an English football club in Newcastle upon Tyne. Newcastle play in the Premier League. In the 2008/09 season they were relegated after 16 years in the top flight, but won promotion back into the Premier League by winning the Football League Championship.

Newcastle United was formed in 1892 after the two rival clubs Newcastle West End and Newcastle East End grouped together. They have played their matches at the ground St.James' Park ever since. This ground holds 52,000 people, and is one of the biggest in England. It is located just outside the centre of Newcastle.

Traditionally the loudest support for the club came from the Gallowgate End - a stand in St. James' Park. This stand is where Alan Shearer once used to watch Newcastle play when he was a child.

The Newcastle United's number 9 shirt is one of the most famous shirts in the world. Legends such as Hughie Gallacher, Malcolm McDonald, Jackie Milburn and Alan Shearer have worn the famous shirt.

All content from Kiddle encyclopedia articles (including the article images and facts) can be freely used under Attribution-ShareAlike license, unless stated otherwise. Cite this article:
Newcastle United F.C. Facts for Kids. Kiddle Encyclopedia.