Formed at Wil, Schär transferred to Basel in 2012, winning the Swiss Super League in all three of his seasons before his move to Hoffenheim.

Born in Wil, Canton of St. Gallen, Schär began his playing career at hometown club Wil and rose through the youth ranks, soon playing regularly for Wil's reserve team. He eventually made his league debut on 29 November 2009 against FC Stade Nyonnais, coming on as a late substitute. He scored his first Swiss Challenge League goal in an away win against Yverdon-Sport on 30 October 2010.

On 4 July 2012, Schär transferred to Basel on a three-year contract with the option of a fourth. He made his Swiss Super League debut on 29 September in a 1–1 away draw against Lausanne-Sport. He scored his first goal for his new club on 7 October in the St. Jakob-Park during the 3–2 home win against Servette, heading an equaliser following a corner from Fabian Frei.

At the end of the Swiss Super League season 2012–13 Schär won the Championship title and was Swiss Cup runner up with Basel. In the 2012–13 UEFA Europa League Basel advanced as far as the semi-finals, there being matched against the reigning UEFA Champions League holders Chelsea, but they were knocked out losing both matches and being beaten 2–5 on aggregate.

The 2014–15 season was a very successful one for Basel and Schär. Basel won the championship for the sixth time in a row that season. In the 2014–15 Swiss Cup they reached the final, but for the third season in a row, they finished as runners-up, losing 0–3 to Sion in the final. Basel entered the Champions League in the group stage and reached the knockout stages, with a 1–1 away draw against Liverpool enough to take them through. Basel later lost to Porto in the Round of 16.

On 21 July 2017, Schär signed a four-year deal with Deportivo de La Coruña. He made his La Liga debut on 20 August, starting in a 3–0 home loss against Real Madrid. He scored two goals in the 2017–18 season, which ended in relegation for the Galician team.

On 26 July 2018, following Deportivo de La Coruña's relegation from the La Liga, Schär signed a three-year deal with Newcastle United after the club had activated his £3 million buy out clause in his contract.

He made his debut for the club on 26 August 2018 in a 2–1 defeat to Chelsea. Schär scored his first goals for Newcastle against Cardiff City on 19 January 2019, netting twice in a 3–0 victory at St James' Park. He scored his third Newcastle goal against Burnley in a 2–0 win, opening the scoring with a 30-yard strike that would win Premier League and Match of the Day's February Goal of the Month competition. His fourth goal came in the final game of the season, and eventual 4–0 win over Fulham. 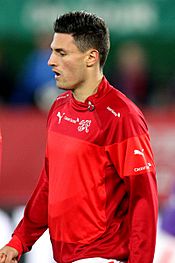 Schär with Switzerland in 2015

Schär was a Switzerland youth international having played at under-20 and under-21 level. Schär made his international debut for the Swiss U-20 team in a game against Poland U-20 on 17 November 2011. He played his first game for the Swiss U-21 on 29 February 2012 in the 2-1 defeat against the Austrian U-21. He scored his first goal for the Swiss U-21 during his fourth appearance for them on 10 September 2012 in a match against Estonia U-21 This was the final game in the qualification to the 2013 UEFA European Under-21 Football Championship. Switzerland finished in second position and entered the play-offs. In the first leg of the qualification play-offs on 12 October 2012 against the German U-21 team Schär was shown the red card after he fouled Sebastian Polter as last man. Despite the goal from the penalty spot the game ended in a 1–1 draw.

He was selected to represent Switzerland in the men's football tournament at the 2012 Summer Olympics as part of the Swiss under-23 team. He played over 90 minutes in the first two games of the tournament, but the team were knocked out, finishing in fourth position of their Group.

On 6 September 2013, Schär scored his first goal for the Swiss senior team in a 4–4 home draw against Iceland. Four days later, on 10 September, Schär scored two more goals in a 2–0 away win over Norway.

On 13 May 2014, Schär was named in Switzerland's squad for the 2014 World Cup. He made his tournament debut as a starter in the team's third match, replacing the injured Steve von Bergen and helping Switzerland to a clean sheet in a 3–0 defeat of Honduras.

In Switzerland's first game of Euro 2016, Schär headed Xherdan Shaqiri's corner kick after five minutes for the only goal against Albania in Lens.

He was included in the Swiss team 23-man squad for the 2018 World Cup.

In May 2019, he was named to the national team for the 2018-19 UEFA Nations League final matches and played in all two matches but finished 4th.

All content from Kiddle encyclopedia articles (including the article images and facts) can be freely used under Attribution-ShareAlike license, unless stated otherwise. Cite this article:
Fabian Schär Facts for Kids. Kiddle Encyclopedia.